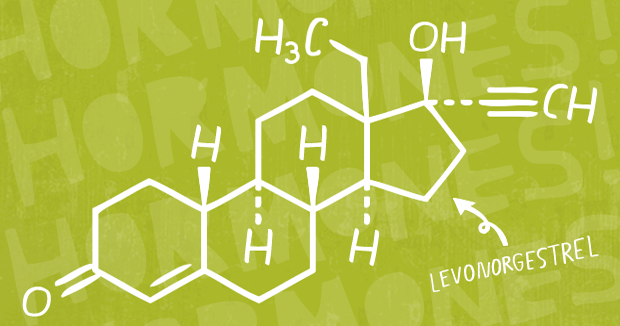 At the most basic level, a hormone is a chemical made in one part of a living thing that travels around and affects other parts of that thing. Hormones are as old as the hills, and probably evolved when life on Earth was nothing but cells bobbing in the primordial seas. The special organs in human bodies that make hormones—including ovaries and testicles—came much later.

What are typical female hormone levels?

When you say “raging hormones,” most people think about those awkward teenage years—complete with sprouting hair, inconveniently timed periods, and zits. This makes sense since it’s during the change from childhood to adulthood that the ovaries start making the sex hormones estrogen and progesterone in large amounts. (By the way, “large amounts” of a hormone are actually very tiny amounts, since we measure hormones in our blood in billionths or trillionths of a gram.)

For the average female between ages 15 and 40 who isn’t using hormonal birth control, here’s what the sex hormones estradiol (a type of estrogen) and progesterone do each day of a menstrual cycle.

Both hormones increase about 10-fold over a few days around the time an egg is released from the ovary. (FYI, estrogen and progesterone aren’t the only hormones involved in coordinating the whole menstrual cycle, but they’re the two that cause either a period or a pregnancy.) The amount and timing of estrogen and progesterone an individual makes changes from cycle to cycle depending on lots of factors—including age, health, stress level, and whether their body will release an egg that cycle or not. Between different individuals, there can be even bigger variations in the amount of these hormones they produce and when.

How do hormones affect mood?

It’s a challenge to make any general statements about how hormones impact people since everyone is different. Studies about the relationship between female hormones and mood have had mixed results. While some recent research has suggested that hormonal methods may slightly increase the likelihood of depression, the most scientifically sound studies show that stress and overall health have a larger—and steadier—impact on mood than hormones.

But some people have serious depression that comes and goes with their periods—about 1% have a medically recognized condition known as premenstrual dysphoric disorder (PMDD). These mood changes are not caused by higher levels of hormones—studies of women with PMDD show they have normal levels of estrogen and progesterone. The actual cause isn’t well understood, but it may be related to differences in the way our bodies process these hormones. People with a mental health condition like bipolar or anxiety disorder may also process hormones differently, leading to different experiences of hormone changes during menstrual cycles.

Because there are as many ways to react to hormones as there are human beings, each individual will be the best judge of how their mood changes during the menstrual cycle.

How do hormones in birth control work?

The hormones in some methods of birth control are similar to the ones female bodies make—close enough that the body recognizes them as estrogen and progesterone. There are multiple kinds of hormonal birth control, each with unique ingredients that are released differently.

The IUD, the implant, the shot, and the mini-pill (progestin-only methods)

Hormonal IUDs release a small amount of a progestin hormone called levonorgestrel. Levonorgestrel is one of the longest-studied types of progestin, and all the scientific evidence to date shows it is super safe. For example, this chart shows the average amount of levonorgestrel measured in the blood of women who have used Mirena (0.18 ± 0.07 nanograms per milliliter) or Skyla (0.08 ± 0.02 nanograms per milliliter) for about a year. These are averages, and individual IUD users may have higher or lower amounts—that’s what the ± means. The amount of levonorgestrel released by these IUDs stays very steady day to day, but declines slowly to even lower levels after the first year. Almost all of the levonorgestrel stays in the uterus; the chart below shows how little is in the blood stream.

How does this amount of levonorgestrel impact the body? Most women using Skyla (>95%) have their usual changes in estrogen and progesterone each cycle, and most release an egg each month. Many women using the Mirena (75-85%) are having their usual hormonal cycles after a year and still releasing an egg. The main way these IUDs work to prevent pregnancy is by keeping cervical mucus thick so sperm can’t get through the cervix to meet with an egg.

By the way, these IUDs have the lowest amount of hormone in the blood for any type of progestin-only birth control—lower than the average amounts for:

These progestin hormones vary in potency, but even the highest levels of progestin in these methods of birth control are lower than the average natural monthly spike of progesterone (>10 nanograms per milliliter) produced by the female reproductive cycle.

The pill, the patch, and the ring (combined hormonal methods)

There are lots of different brands of combined pills, but they all need to be taken once a day and they all contain both an estrogen and a progestin. This chart shows that the average amount of hormones from the pill in women’s blood ranges from 1 to 6 nanograms per milliliter of levonorgestrel (the progestin) and 10 to 80 picograms per milliliter of ethinyl estradiol (the estrogen). The amount changes depending on how many hours ago the pill was taken, peaking after about two hours and then going down. The body clears all the hormones from the pill within 36 hours—that’s why you’ve got to take one every day for it to work!

This chart is based on a pill known as Microgynon, but other brands contain the same amounts of active ingredients (including Seasonale, Seasonique, Jolessa, Quasense, Nordette, Levora, Portia, and Levlen).

In general, when on the pill, the female system makes less of its own progesterone and estrogen. Pill users don’t make their own spike of progesterone, nor do they release an egg—that’s what makes the pill work as birth control.

Dr. Lesley Miller at the University of Washington in Seattle points out that “when a woman is on the birth-control pill, every day becomes the same hormonally. The woman has a set dose of progesterone and a set dose of estrogen… Every day becomes the same pattern." For people with PMDD, having the same amount of hormone every day can be a good thing. In fact, the pill is sometimes prescribed to treat PMDD, and continuous use may help even more.

There are also other methods of combined hormonal birth control that don’t have daily changes in the amount of hormones in the blood:

To hormone or not to hormone… It depends.

If you’ve had a bad experience with one hormonal birth control, other hormonal options may still work for you. You may hate the shot but love the implant, or hate the pill but love the ring. It’s not unusual to try multiple methods before finding one that works for you—the important thing is not to give up. Make sure to get help with your search from a health care provider, because certain medical and genetic conditions can impact your birth control choices.

Some people have tried different kinds of hormonal birth control and had bad experiences with all of them. Luckily, there are still options if you've reacted negatively to hormones or just prefer to avoid them. The most effective non-hormonal birth control option is the copper IUD. Condoms, the diaphragm, and fertility awareness methods also offer good protection against pregnancy when used carefully and consistently. These methods don’t change your natural hormones at all.

implant
IUD
the pill
the patch
the shot
the ring

There are a lot of common questions around pregnancy and birth control. Here are the answers to five.
May 13, 2021

How did honest conversations help this woman take control of her mental health?
May 7, 2021

This virtual store illustrates a future where the pill is accessible; without a prescription or age restriction.