On condoms: How a physical barrier can also be an emotional boundary

On condoms: How a physical barrier can also be an emotional boundary 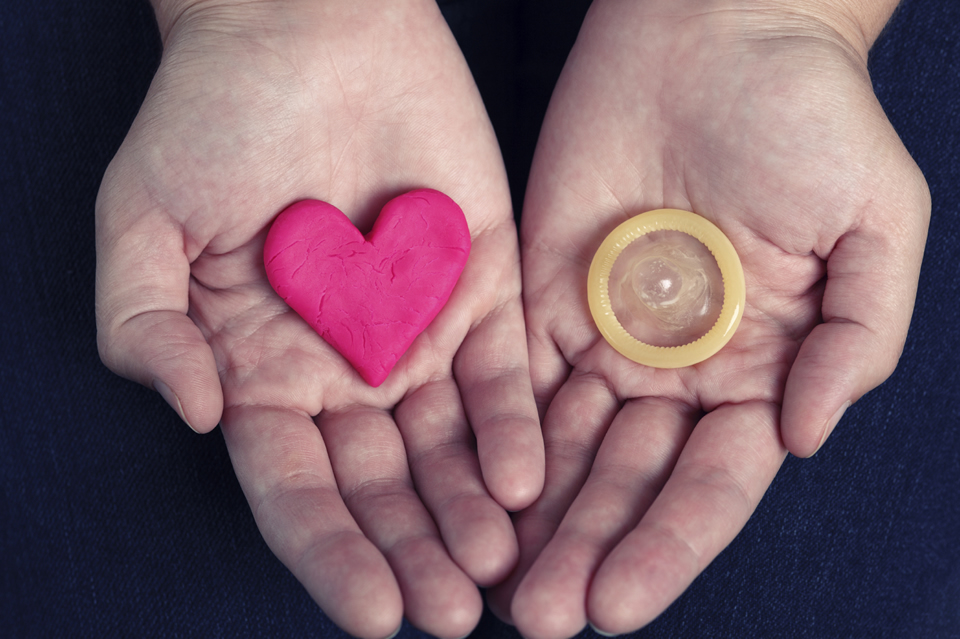 I loved sex and hated intimacy for a long time.

There are lots of reasons my preferred birth control method has long been condoms. They’re easy to find, free at the cafe I like off Market Street, super effective and come in neon colors! I also found out from my current boo that there’s this new variety that he calls “the dick-numbing kind;” it has a little bit of numbing gel in the tip for when I want to have sex for a longer-than-usual amount of time.

But if I were being honest I’d have to say that I liked condoms for most of my life because I liked that little bit of distance—even though it was less than a millimeter thick—between me and my lovers. To understand why that distance mattered to me, I have to go back to my history. It seems weird and kind of inappropriate to say that my birth control of choice has to do with my relationship to my family, but doesn’t everything?

I grew up in a dysfunctional home, filled with people who loved me very much but who were inconsistent and more like children than I ever got to be. I didn’t trust them. I can’t remember a time when I felt safe as a child.

When you grow up in a home like that, you don’t learn how to be vulnerable. Instead of learning to trust myself, I learned how to set up really intense rules that were meant to keep me safe. Those rules did prevent me from getting hurt, but they also kept me from getting close to people. I had difficulty making connections with others—especially romantic partners. I set up walls.

It’s hard to keep those walls up during sex because it’s so intimate. You’re smelling someone’s breath and tasting their spit. You’re watching them undress, letting them touch you, seeing them in a way that very few people will ever see them, hearing sounds not even their friends will ever hear. And they’re seeing you that way too. When I’m having sex a part of someone’s body is inside of my body. The experience can be overwhelming from an emotional perspective, and in the midst of those moments my terror would rise and manifest in disgust at the idea of being so close to another person.

Disgust, I would learn later, was a way that I learned how to manage my fear of being close to my partners. It was like a smokescreen—a dummy emotion that was meant to keep me from feeling the hurt I felt during my childhood. I relied on condoms to give me that little bit of space—the teensiest bit of distance—that made me feel safe when I was scared to get too close.

Something physical between their skin and mine, the condom was like a talisman I could hold onto to keep my distance—even if we were dating, even if we’d said “I love you,” even if I’d met their parents.

As time would pass and we’d get deeper into the relationship, they’d ask if I would consider a non-barrier method. I’d pretend I was open to it, half-heartedly discuss it with the gyno when I went for a check-up, tell my partner that for some reason or another I didn’t like what was available to me. Then we’d go back to what felt safe to me.

Some time has passed. I’ve stopped talking to the parts of my family that hurt me and am—for the first time in my life—able to trust my partner. I’m in a relationship with someone I trust and love deeply now. We have more sex than I’ve ever had, and we have sex for more than pleasure. We have sex to feel close. I find myself wanting all the things that I’d feared all the times before. We still use condoms, but I don’t need them to feel safe anymore (I can do that without them). I just need them to stop me from having a baby.

Virgie Tovar started the hashtag campaign #LoseHateNotWeight and is the author of You Have the Right to Remain Fat (August 2018). In 2018 she was named as one of the top 50 most influential feminists by Bitch Magazine. She holds a Master’s degree in Sexuality Studies with a focus on the intersections of body size, race and gender, and has been featured by the New York Times, Tech Insider, BBC, MTV, Al Jazeera, and NPR.