How to have 'the talk' with your mom

How to have 'the talk' with your mom 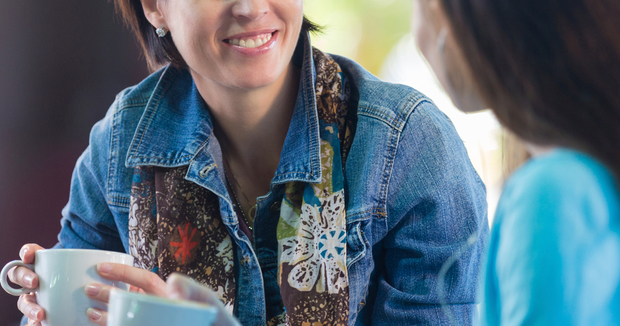 When my mom found out I was having sex (I repeat: “found out”) back in the day, it wasn’t an ideal situation. For Mother’s Day, I decided to take an informal poll of young women from lots of different backgrounds to find out how their mothers came to know of their sexual activity. The poll revealed it’s not just me: Many of us don’t experience an ideal situation.

A few key themes surfaced from the poll:

1) Their mom “just knew.” One woman said her mom could just see it in her body language.

2) Their mom snooped. A few women had a my-mom-read-my-diary situation.

3) Their mom stumbled upon a condom, a birth control pill pack, etc.

4) Their mom found out because they told her—but usually not directly.

Some women said their mom still doesn’t know, or at least, they’ve never talked about sex with her. These sort of patterns point to an unfortunate reality: Talking about your sexual health with your parents—especially when it’s the first time—can be difficult, and may even seem risky.

A lot of the time though, it’s a risk worth taking. The benefits include things like not having to tiptoe around getting birth control while insured on your parents’ health insurance plan, or not missing out on potentially awesome advice about what to do in a crisis-ish situation. If you have an interest in capitalizing on such benefits, consider celebrating Mother’s Day by having an empowered chat about your reproductive health with your mom. Here are some tips, which can also be applied to talking with your dad, aunt, other mom, etc.

1. Ask your mom about her own experience. If she's reluctant to open up, remind her that you respect her and want to learn from her.

Based on my poll and my own experience, a key thing mothers want is for their daughters to avoid making the same mistakes they feel like they made. Many of the women in my poll who reported having open conversations with their moms were aware of their mothers’ own choices as a young adult. It wasn’t until my mom shared her own experience with taking the birth control pill that we both felt comfortable talking openly about birth control.

2. Break the ice with a joke about something relevant you share.

Once I got on the pill and learned that my mom had taken it in the past, I’d talk with her about its side effects to establish a non-awkward, relevant conversation stream. Note: If you're a woman starting a conversation with your mom, menstruation humor can be a great go-to. You can always commiserate about period side effects, especially cramps or bloating. (There are many things that bond us as women—leverage them!)

3. Tell your mom you want to do the responsible thing and take advantage of preventive health care services.

If you have insurance, women’s preventive care services like annual well-woman exams, contraceptive counseling, STI testing and counseling, and cancer screenings should all be covered without any out-of-pocket costs. If your mom asks why you’re interested in these services, you don’t have to lie: Say, “To stay healthy.” Birth control can provide benefits in addition to preventing pregnancy—it can help to regulate your period, reduce period pain, get rid of acne, prevent ovarian cysts, and more. If your mom isn’t completely opposed to the idea of birth control, you can nudge the topic—and eventually the topic of sexual health, in general—into an everyday conversation.

I learned these tips the hard way. At the time, my mom discovering my sex life seemed to mark a low point in our relationship, but ultimately it brought us so much closer together. It sounds crazy, but I’m glad she did what she did. Here's how it all went down.

How my mom found out

I was talking on my home phone. When I say “home phone”, I mean landline. When I say "my" home phone, I mean that my parents and I had two landlines at our house—one of which primarily functioned as our dial-up internet line but was also “my” line. It was a very teenager-in-the-early-2000s setup.

As the story goes, my mom picked up the phone to check if the line was available so she could use the Internet. Instead, she found herself listening to my phone conversation with my best friend, in which I mentioned my concern that my period was late.

A few days later, after getting home from school, my mom called me to the kitchen. She and my dad were sitting at the counter, quiet and avoiding all eye contact.

My mom spoke with a straight face: "Do you want to talk to us about something?”

That was the line that started an hours-long argument about my age, my choices, dating, pregnancy, and so on. My parents’ first assumption was that I had been pressured by my boyfriend into having sex. When I told them, “If anything, I pressured him into it,” the argument hit the upper echelon of teen-parent arguments. At the end of it, I was told I wasn’t allowed to see my boyfriend anymore.

At one point in our argument, they asked “Why didn’t you tell us?”

What they didn’t realize was that I had tried many, many times.

At the end of my freshman year, I met the guy I would date for most of high school. After dating him for a while, I started trying to talk to my mom about my friends’ dating habits as a segue into a conversation about my relationship. Each time I’d notice her tense up or get defensive and accusatory, sometimes threatening to bar me from seeing my boyfriend and my friends.

I got the sense that my mom believed I was someone I wasn’t—or was in denial about who I was. This pushed us further apart. When she found out I had sex, I could see the reality hit her, and it didn’t feel good.

The moment of truth

The day after the argument, my mom picked me up right as school let out. She said she was taking me to the gynecologist. When I asked why, she said, “Because I’m not paying to raise your kid.”

In the exam room, there were two chairs next to each other against the wall. We sat side by side saying nothing, waiting. When the doctor walked in, her expression communicated that she would be reinstating the argument my parents and I had put to rest.

I could feel my mom getting angry next to me—she was shaking slightly.

"I'll be right back to start the exam." The doctor walked out, closing the door abruptly.

I started crying. "I hate her."

"No she's not. She's a bitch." (I don’t call women bitches anymore, but back then I did. Also, this woman was sort of a bitch.)

My mom said nothing as she exited the room so I could undress. A few minutes later, she and the doctor returned, and the exam started.

“Do you want to hold her hand while I do this?” the doctor asked, motioning to my mom. I grabbed my mom’s hand. I held it during the whole of my first gynecological exam, and squeezed it tightly.

After the exam, my mom and I sat and waited for the doctor to come back with her final consult, or as I see it, final insult.

"I'm putting you on birth control pills,” my mom said quietly. “It doesn’t mean that you’re allowed to have sex,” she said, pointing her finger at me.

We stared at each other with teary eyes and angrily contorted faces that were beginning to soften. The doctor came in and invited us into her proper office, where she sat behind a large mahogany lawyer-y desk. She handed the birth control prescription to my mom and smirked.

"You're the youngest patient I've ever written a birth control prescription for,” she said. She paused. "I want to see you back in a month to make sure the birth control is working out for you, okay? Okay. Just go schedule an appointment for a month from now with the nurse up front."

As my mom and I were exiting the office, I stopped at the nurse station, but my mom kept going.

"Where are you going? We have to schedule another appointment, remember?"

My mom stopped and turned around. "I thought you said she was a bitch?"

I stood very still, thinking she was saying forget-the-whole-thing-it-was-a-bad-idea-you-can't-take-birth-control. Then I smiled because I realized my mom was offering to take me to a different doctor. She smiled back.

"We'll find someone else for you. You're right, she's kind of a bitch."

Funnily enough, that was the moment everything changed for the better.

My mom saved my life

I often tell people, “My mom saved my life.” She saved me from a life that wouldn’t have measured up to the one I have today. To do it, she had to swallow her pride and trust me as a young adult instead of as a child.

This Mother's Day, I want to thank my mom for getting me on birth control, especially at a time when the decision was difficult to make. I am knowledgeable about my sexual and reproductive health because my mother knew it was my right to be. If you haven’t talked to your mom about these things, give it a shot. The benefits can heavily outweigh the disadvantages.

Celebrate Sexual Health Awareness Month this year by opening up discussions about pleasure with the young people in your life.
July 14, 2022

How can teens identify red flags in their relationship early on?