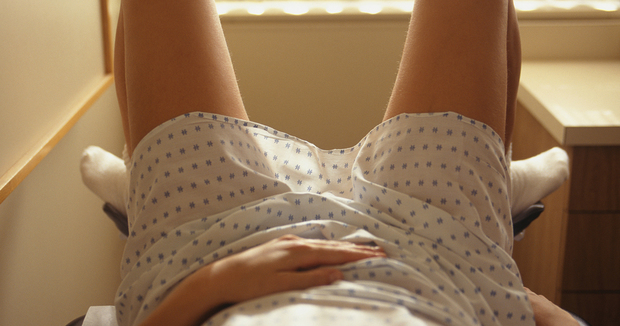 At first, having an IUD seemed like a great option for me. I could get it and forget it, and since I got the Mirena, I could look forward to significantly lighter periods for up to 6 years. And even though I had some cramping post-insertion, after a few days I felt totally fine.

So, you could imagine the tidal wave of panic that washed over me when, a couple weeks later, I started experiencing heavy bleeding and sharp abdominal pains that would leave me frozen and clutching my belly in the produce section at the grocery store. It got worse over the course of a month, and by the time I made an appointment with my health care provider to see what was going on, I was convinced that my IUD had at least partially expelled itself. But when I got into those stirrups and my provider looked around, she said that my IUD was still there and behaving normally. Apparently my preliminary Mirena side effects were just more intense than average. My provider told me that eventually these side effects would fade or go away, but she added that I might experience them for a few months before they stopped. She looked up at me between my legs and asked what I wanted her to do. I paused, took a deep breath, and said, “Take it out.”

I had been thinking about getting my IUD removed ever since the cramping started, but I had no idea what that procedure was like. There was information online about IUD insertion, but no matter how many times I desperately searched Google in the middle of the night, I couldn’t find anything that answered my questions about IUD removal. Does it hurt? What kind of tools are used? And is a WebMD commenter with a screen name like “horselover336” (not a real WebMD user, but you get the idea) really the authority on this?

According to Linda Dominguez, a Nurse Practitioner at Southwest Women's Health in Albuquerque, New Mexico, there seems to be a general lack of credible information out there about IUD removal.

“Fear of the unknown and gathering information from non-credible sources is a big problem for our patients. There is some poorly written and actually untrue information posted on the web, so beware of your information gathering!”

I was definitely suffering from this “fear of the unknown” as my provider started getting ready to remove my IUD. I had read some random comments online that said IUD removal could be just as painful as or even worse than insertion, and I could already feel my body tensing up, preparing for the worst. I just hoped it would be over quickly.

Since I couldn’t exactly see what was going on, I asked my provider to walk me through the process step by step. (I highly recommend doing so for any procedure involving your nether regions.) She had already inserted a speculum, so that part was done. She told me she was going to grab onto my IUD strings with forceps and I might hear a little clicking sound, which I did. Then she told me to take a deep breath, hold it, then breathe out. By the time I exhaled, it was all done. From beginning to end, the procedure took about 10 seconds.

The level of discomfort I experienced was comparable to the sensation of taking a tampon out, but for about 2 seconds, followed by an all-encompassing wave of blissful relief. I felt enormously happy knowing the object that had caused me so much pain was finally out and I could now start another method of birth control.

I’ve since gone back to the birth control pill I previously used, and I’m very happy with it.

It’s important to note that the IUD removal process differs from person to person. Dominguez says that the level of sensation can vary from the pain of a menstrual cramp to no pain at all, because “each of us is ‘nerve wired’ differently.” Plus, there is always a very small risk that the removal procedure could have complications (which is one good reason to go to a provider rather than trying to remove your IUD yourself). In general, it’s wise to talk to your provider before getting your IUD removed, or before quitting any birth control method.

My IUD experience wasn’t the best, but I can easily say that the removal process was way simpler than I had expected and virtually painless. I don’t regret exploring the option of getting an IUD and would still consider this method in the future. I just might try Skyla or Kyleena next time. Take that, horselover336!

P.S I saw my IUD on a little plastic tray after it was taken out. After I dramatically yelled “Why did you betray me??” to it, prompting my provider to laugh with what might have been thinly veiled concern for my sanity, I said goodbye to my Mirena. I hope it’s happy wherever it is now. I know I am.

BC Is For More Than Just Prevention

Here are 5 reasons beyond unplanned pregnancy to say #ThxBirthControl.
July 2, 2021

This Independence Day we say #ThxBirthControl for all that it does for us and our ability to live life on our own terms.
June 21, 2021

The Colorado Family Planning Initiative expanded access to more forms of contraception in the state leading to higher graduation rates.