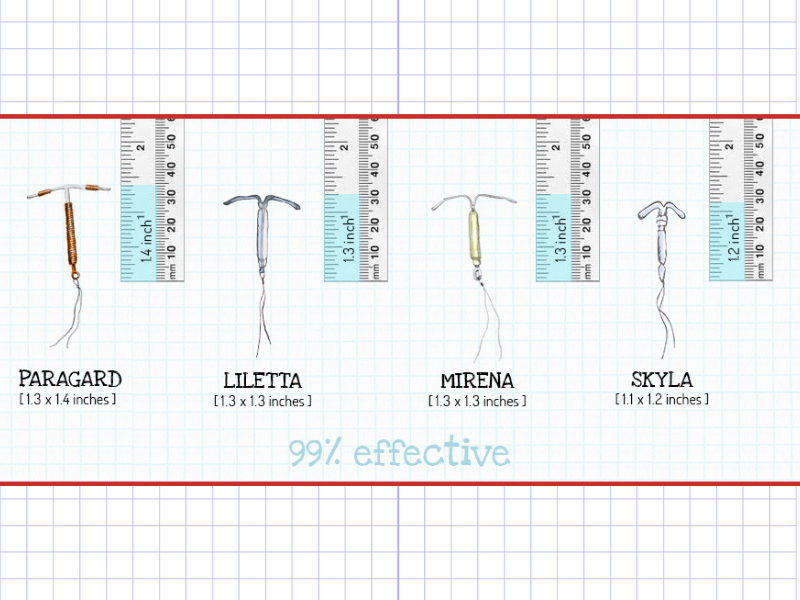 The IUD—or intrauterine device if you want to be technical—is a small, t-shaped piece of plastic that goes in a woman's uterus and protects against pregnancy for three to 12 years (depending on which one you get). There are four types: Paragard, Mirena, Liletta, and Skyla.

After being inserted into a woman’s uterus, the IUD prevents sperm from fertilizing an egg—sounds like magic, but it actually works pretty well.

IUDs are more than 99% effective.

Note: When we talk about effectiveness we mean typical use numbers or what happens when couples used this method of birth control pretty well; it accounts for human errors and occasional contraceptive failure. BUT, teenagers are often not as careful as older people in using these methods, so real typical use rates for teens may be a little worse than what you see here. Keep that in mind as you're looking at the options and remember that for birth control to be effective, you have to use it consistently and correctly every single time.

​​Note: Not every woman experiences these drawbacks—they are just some of the ones that are commonly reported. Talk to your medical provider to learn more and keep in mind that if this method doesn’t work for you, there are LOTS more out there…but it’s best to wait at least six months to see if things get better before you decide to switch. If they don’t, or if you just can’t deal with them, talk with your medical provider about finding something that works for you.

NEED TO SEE A MEDICAL PROVIDER?

Yep; three of the four IUDs are hormonal contraceptives but all four need to be inserted into the uterus, so you’ll have to visit your medical provider or a health care clinic to get one (but you’ll only need to go once to have it inserted and once to have it removed).

Originally published on stayteen.org on January 2, 2015.

Setting boundaries is important to protecting and respecting one's identity and health in all relationships.
January 12, 2023