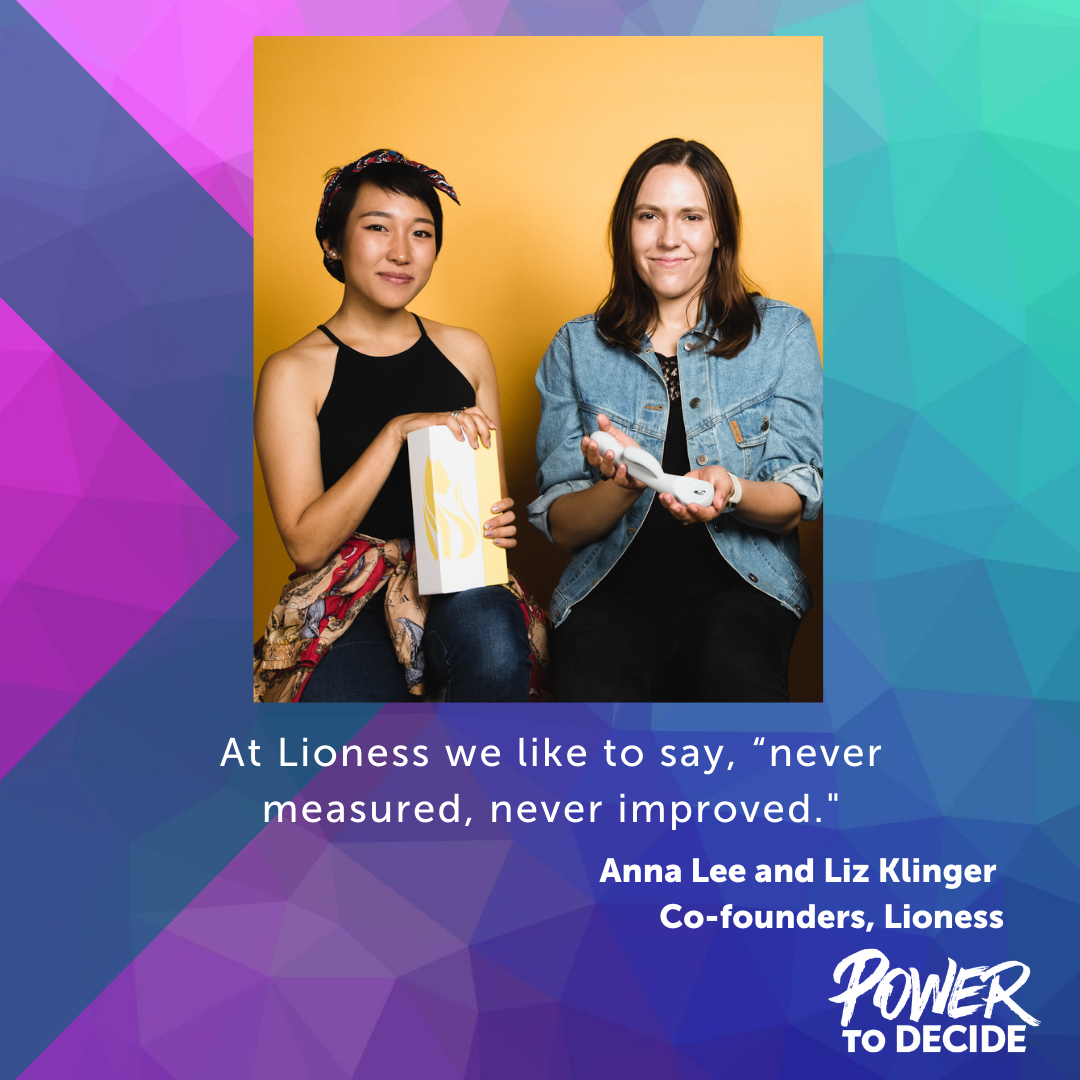 We’re committed to uplifting the amazing womxn in tech who are working to ensure that everyone – no matter who they are or where they live – can achieve reproductive well-being. Brought to you by Pandia Health, we are pleased to launch the Power Womxn series in which we will feature womxn FemTech leaders and founders who are out to change the world!

This month’s Power Womxn are Anna Lee and Liz Klinger co-founders of Lioness.

What inspired you to start/lead your company?

Everyone from college students and young adults to mothers and grandmas had questions… and they’d ask me, a 20-something at the time who didn’t really know that much, though oftentimes I’d be the first person they’d ask because I was able to create the space to have the conversation.

At first, I felt relieved — I wasn’t the only one with a million questions! But upon further inspection, like my own questions, a lot of the questions seemed like things we should have answers for, but there just aren’t many easily accessible places to consult for information that is both from a good quality source and personalized. Also, it can be really tough to broach a topic like sex if it’s really charged for someone.

Our newest initiative is the first-of-its-kind Lioness Sex Research Platform, a way for researchers to use real-world, physiological and subjective sexual function data in their own research contributed by users who opt in and are interested in participating and contributing to research. It’s the first time research can use physiological data outside of a lab and on a large scale — from thousands of users around the world. Users can contribute to groundbreaking research and maybe learn a thing or two about themselves!

How does your work help give people the tools to achieve reproductive well-being?

Anna: There is a huge lack of research when it comes to understanding health overall for womxn, and an even bigger gap in sexual health for people with vaginas. This, combined with societal stigma, results in a lot of left with more questions than answers. “Do other people experience this?” “Why is my body acting this way?” and the dreaded, “Am I normal?”

How would you define success for your company and for the fem tech space, more generally?

Liz: My pie in the sky dream is that someday, companies described as FemTech now will be so successful that we can go beyond using such a broad, imperfect term like FemTech.

I go into a deeper dive in my article on the industry (if you’re curious, you can check it out here), but in a nutshell: the term came about for fundraising/investment purposes and the audience was venture capitalists (VCs) and investors (who are mostly wealthy men) who are used to discussing industries like FinTech (Finance technology), AgTech (Agriculture technology), etc. to evaluate and compare different potential investments. FemTech was an easy way for them to start thinking about and treating companies like ours as a real industry worthy of time, resources, and investment. To some degree, that has worked.

Outside of the VC bubble, FemTech makes less sense. For the general public, it overlooks the needs of trans and nonbinary people. In business contexts, FemTech often ends up being interpreted as fertility and sometimes contraception, established industries that focus on pregnancy and motherhood. Everything else a womxn could experience is overlooked.

Case in point: a very popular investment resource that investors use, CB Insights, has deliberately kept all sexual wellness companies (including Lioness) out of their “women’s health startups” map for years because their senior management is not comfortable including those companies despite their commitment to sharing “insights on probability, not punditry.” It’s little things like this that over time add up to bar sexual wellness companies and other companies outside of pregnancy and fertility from being discovered by those who are curious to find and learn more about them.

How do you see the FemTech space changing in the next 5 years? What are you looking forward to?

Anna: When we started in the FemTech space 6 years ago, it was still quite a new space that a lot of investors were hesitant to support. The words FemTech and SexTech weren’t even terms yet!

We’ve found that there are a lot of people who are supportive of people with vaginas’ sexual health, but as we went up the executive chain, there’s some upper management who thought it’s icky, afraid of what their bosses will think, and killed the idea.

Now, as more FemTech companies come up, led by badasses who won’t play by the status quo, we’re seeing more conversations sparked globally for broader acceptance into mainstream society. Just last year Lioness was removed from Samsung’s women’s health event last minute because a senior director didn’t approve of our product being there (she claimed it had absolutely “no place in women’s health”), but on the flip side, later that year we won the Johnson & Johnson’s Women’s Health Innovation Award and we were able to show at CES for the first time (and took home several Best of CES awards!).

While we’re not quite at a place yet where sexual wellness is fully accepted, we’re making clear improvements towards normalizing it. I think we’ll see even more of that in the next 5 years.

What advice would you give other womxn looking to get into FemTech?

Anna: People will always give you 1,001 reasons why you shouldn’t do it. How hard it’s going to be. How the space is “unsexy.” Find your people, the beautiful weirdos, the believers, the out-of-box thinkers! We’re here to support you and can’t wait to meet ya!

An Equitable Framework for Femtech

How can femtech increase equity in sexual and reproductive health?
August 4, 2021

Tech philanthropy is great, but what if your sexual health tech project is earlier in development?
July 6, 2021

Show Me the Money

There’s a whole world of tech funding that might be a good fit for your sexual and reproductive health project. How to raise money for your tech project.