Behind the Scenes and In Front of the TV: Two Perspectives on Dawson’s Creek

Behind the Scenes and In Front of the TV: Two Perspectives on Dawson’s Creek 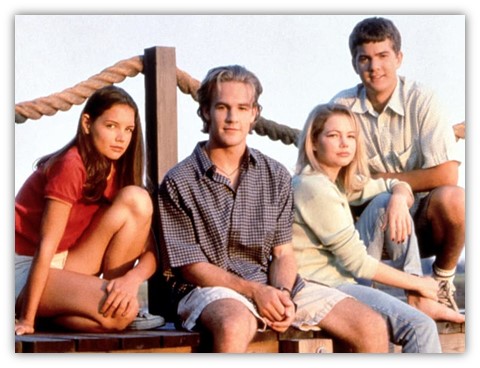 Premiering in 1998 and running for six seasons, Dawson’s Creek followed the lives of a close-knit group of friends through high school and into college. In addition to having the first romantic same-sex kiss in the history of television, this show broke down barriers for its young audience and discussed important themes related to sex, love, relationships, and parent-teen conversations. The characters explored mental health care and therapy; having sex for the first time and using condoms for safer sex; and the role of nontraditional families and the importance of chosen family.

Throughout the series, Power to Decide worked with executives at The WB and with writers and producers of the show to provide story material, real voices from teens, and the latest data. We served as a sounding board and research arm to help the show deal with sex, love, and birth control in a way that suited the show’s wry tone but was also grounded in evidence. Marisa Nightingale, Power to Decide’s Senior Director of Entertainment Media then—and Entertainment Consultant now—led this collaboration. Cat McKay, our Digital Coordinator, grew up watching the show as it aired.

How did Power to Decide get involved with the writers/creators of Dawson’s Creek?

Marisa: Power to Decide was privileged to have a devoted and high-caliber group of media executives guiding and growing our work from day one. The WB’s co-head of programming at the time – who sits on our Board today, Susanne Daniels – felt that this show would be a good fit since we were reaching the same audiences and were all talking about sex, albeit from different perspectives.

Daniels introduced us to the show’s producers and framed it for them not as a dry obligation, but as a potential to support their storytelling. Her colleague Gina Girolamo helped ensure that our approach would make these collaborations mutually beneficial—then and now.

Once she introduced us to the producers and their writers, we met in person regularly and stayed in touch in between, flagging new research and trends that we thought would be a good fit for their characters. In turn, they shared goals for how they wanted characters to develop so that we could best tailor our materials and offer ideas. They were so open and friendly, and I think they really saw the value in the relationship. The executives and producers who created Dawson’s Creek have since gone on to create many other beloved shows, shaping conversations about sex and relationships for a generation.

When did you start watching Dawson’s Creek and what drew you to the show?

Cat: I watched Dawson’s Creek for the first time while on vacation with my family in the early 2000s. The beach house we were staying in had the first few seasons on VHS tape, so each afternoon in between trips to the ocean, we would all gather in front of the TV set and binge a few episodes. Along with all my other favorite ensemble-cast shows of the time, I finished it up at home any chance I got. Being the youngest of five siblings, watching something deemed more mature was the norm for me. In place of more direct conversations about sex and relationships, my parents welcomed any and all shows and movies that addressed the topics. When I saw that every season was available to stream on Netflix AND Hulu, I jumped at the chance to re-watch!

What was Power to Decide’s goal in working with Dawson’s Creek?

Marisa: We wanted to become part of the trusted relationship that Dawson’s Creek had with its fans –who were also our core audience. The show was telling frank, open, and edgy (at the time!) stories about sex and relationships. I think adults only saw the sex; young audiences saw the way that relationships unfolded and all the nuance and heartbreak that accompanied the sex.

We wanted to broaden the range of what young people were hearing about relationships and sex: that birth control was a normal part of sex. That you can always choose not to have sex, even if you have had sex before—it’s your choice every time. That talking with your partner about sex and birth control is a sign of intimacy. That despite what you think, everyone in high school isn’t having sex. We also wanted to share some facts – but only in ways that the writers wanted to work them in.

Did any of the storylines really stand out to you when you were younger? Have any stuck with you as you grew and matured?

Cat: Two plotlines stood out as my identifiers for the Dawson’s Creek throughout the years. The episode where ‘bad girl’ Abby Morgan dies after drunkenly falling off of a pier served as a formative example of the dangers of underage drinking. Even though Abby wasn’t the most well-liked citizen of Capeside, her death had an impact on all the whole friend group. Apart from their decisions about sex and love, the characters usually tried to make smart decision when it came to alcohol. Their group could always manage to have a great time sober!

One of the stipulations of being allowed to watch shows where teenagers had sex was being open to the lecture from my mom about the importance  of safe sex. I was interested in shows like Dawson’s Creek and Secret Life of the American Teenager before being sexually active was even on my radar. When I first watched the show, I resonated with Dawson’s preoccupation of everyone’s virginity status, as I was a prepubescent virgin myself. In the early seasons, despite having a few girlfriends, he isn’t as eager to have sex for the first time and is particularly disturbed at the thought of his perceived soulmate Joey having sex. While I related to the apprehension around sex when I was younger, my more experienced self thinks that Dawson could have benefitted from a lesson in embracing your sexuality.

Which storylines stood out to you as particularly important or productive?

Marisa: Two of my favorites:

We talked with the producers about the pressure that teen boys were under to have sex, even if they weren’t ready. Teens reported that pressure was coming from friends, partners, their families, and the media. We talked about how important it would be to have more portrayals of cool, sex-having guys who chose not to have sex. Not the strict “abstinence-only” model of that era; but for reasons that made sense in his life or relationship. The writers and producers decided that Pacey—who had all the sex he wanted, including with his teacher—would choose not to have sex with his girlfriend Andie, even though she felt she was ready and wanted him to be her first. Pacey chooses to take it slowly because he loves her and wants their relationship to develop more. It was so funny and sweet and most importantly, was the right story for Pacey.

When Dawson’s parents suspect that Dawson and Joey are having sex (they aren’t), they decide that it’s time for “The Talk.” Dawson’s mom Gail ambushes Joey on the porch with an illustrated book about reproduction; while Dawson’s dad Mitch is in the kitchen quoting from “A Statistical Portrait of Adolescent Sex and Contraception” – our 1998 publication establishing the data landscape and perhaps our driest publication ever. Mitch tells Dawson, “teens who have sex on a regular basis without protection stand an 85% chance of pregnancy within a year….” much to Dawson’s humiliation. The show used these moments to say a lot: that teens need to hear from their parents and other adults who care about them; that sometimes these conversations will feel deadly awkward; that it’s important to do it anyway; and that these moments can enhance comedy rather than killing it.

When you recently re-watched the show how did you feel about the information on sex, love, and birth control? Did it resonate differently because you now work in the world of reproductive health and for Power to Decide?

Cat: Other than the truly tragic hairstyle and outdated outfit choices, the show’s moments highlighting sex and relationships stood out to me. I’m a nerd for all things birth control, so I was particularly proud that almost every sexual encounter throughout the series involved condoms. With condom use declining among young people, there are a lot of teachable moments in the series that serve as examples that introducing a condom doesn’t have to ruin the mood. Another plot that stood out was when Jen takes over as a radio host for her college in season five. She decides to take questions about sex, love, and relationships live on air, an impactful move that proves that talking is power.

I also didn’t realize at the time that Jack’s character, despite his faults, was a pioneer in the representation of queer love. Watching him navigate the delicate nature of being gay, coming out, and finding self-acceptance in the late 90s not only reminded me of how much television and society has progressed, but also how far we still have to go with fair and honest portrayals of LBGTQ+ folks on screen. While not every plotline makes as much sense now as it did when the show was on the air, the six seasons are full of inspiring moments to get powerful conversation started with the young people in your life.

Do we know if the show had any impact on viewers’ attitudes about sex?

Marisa: Based on several efforts to answer this question, including an “audience tracker” evaluation we did in 2003 along with The WB and General Mills, we found that Dawson’s Creek had a positive impact on viewers when it comes to sex, relationships, and pregnancy:

This is especially notable because it demonstrates the difference between how adults interpreted the sex in the show vs. how teens saw it. They connected deeply to these characters and really cared about the choices they made. The audience’s takeaways included how sex affects a relationship, how a pregnancy scare sticks with you long after it’s over, and how using condoms is just what you do.

When young people can see themselves in their favorite characters in pop culture, that’s when learning takes place. That’s why I’m so excited about the show’s renaissance. It’s the ultimate re-watch for adults who grew up with it and the perfect 1990’s time capsule to introduce to the young people in your life.