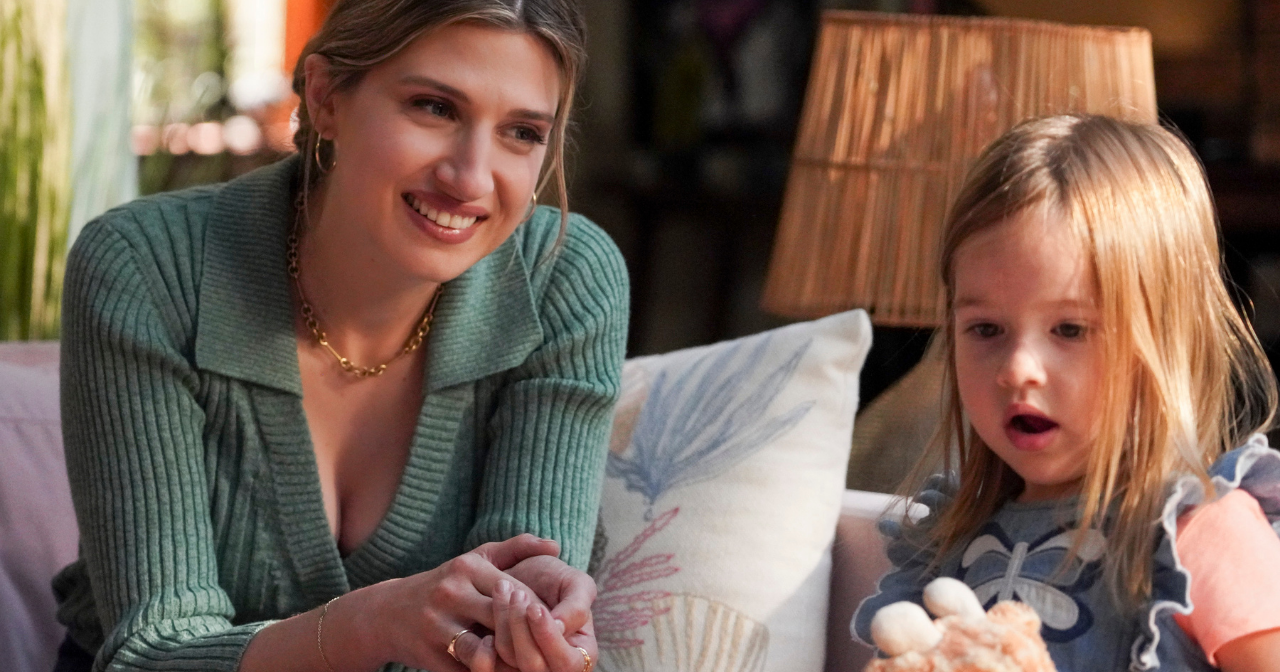 Thanks to streaming services and more time at home, audiences are discovering and rediscovering TV shows and films that connect with them and keep them hooked. This emotional connection between audiences and their favorite characters has deep value not just to the shows’ creators—but to our mission at Power to Decide as well.

When our TV partners tell stories about sex, love, relationships, unplanned pregnancy, birth control, abortion, and the context in which it all happens, we are privileged to provide them with expertise, information, and resources to support the diverse and complex worlds they build. Through live tweets and other social collaborations, we reach viewers where they are when they are most attentive, and extend the conversation beyond the bounds of a particular scene or episode. Each show has a robust social universe in which fans weigh in and interact with producers, cast, and other fans.

Why does this matter? Because two out of three young people age 12-24 say that when there is a story about teen/unplanned pregnancy that they can relate to in popular media, it makes them think more about their own risk. More than half of young people have had a helpful conversation with parents/trusted adults about sex, love, relationships, and contraception because of something they read or viewed in popular culture such as TV, movies, and magazines/digital sites.

The more viewers care about and relate to the characters and stories they’re seeing in pop culture, the more powerful the impact. As part of its overall effort, Power to Decide’s pop culture partnerships have helped drive historic declines in teen and unplanned pregnancy over the past two decades by informing audiences, sparking conversations, personalizing risk, and helping to shift norms. Here are four of the most recent examples of our partners’ storylines and what they mean to audiences: 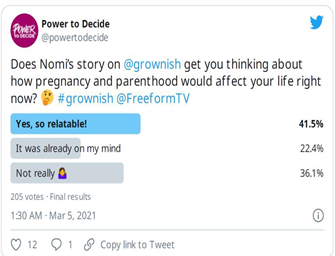 This award-winning spin-off of ABC’s black-ish follows Zoey Johnson and her tight-knit group of friends as they navigate college, sex, love, relationships, and emerging adulthood. Now in its fourth season, the show mixes comedy with social commentary –from student debt to Black Lives Matter protests and mass incarceration. Zoey’s housemate Nomi gets pregnant, drops out of college, and then comes back to graduate on time - all while her friends help support her in raising baby Luna without—and then with—her baby’s father.

Half of teens say they’ve never thought about how a pregnancy would affect their lives; Nomi’s storyline invites viewers to imagine what they might do in her situation and opens up candid conversations and divergent views about pregnancy and what it means to be a parent. By sharing our resources during weekly live tweets and through their other social channels, grown-ish is helping its more than 1 million highly-engaged social followers personalize Nomi’s situation and get informed. 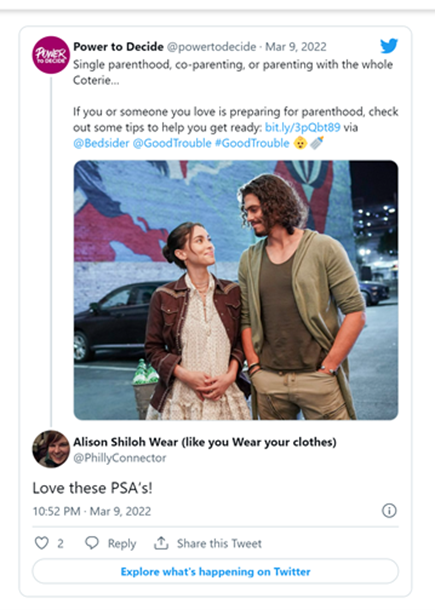 Now in its fourth season, this critically-acclaimed spin-off of The Fosters follows twenty-something sisters Callie and Mariana Adams Foster and their eclectic group of friends and housemates in The Coterie in downtown LA. As they pursue their careers and love lives, they face challenges and betrayals—as well as love and support—and fight for social justice on everything from supporting incarcerated moms to closing the wage gap. Gael and Isabella are going to be parents (after a one-night stand) and explore what it means to co-parent with their larger group of friends. Through weekly live tweets with the show, audiences are demonstrating that the show is making them think about how an unplanned pregnancy might affect their own lives right now, and what it takes to parent while still forming your own adult identity. 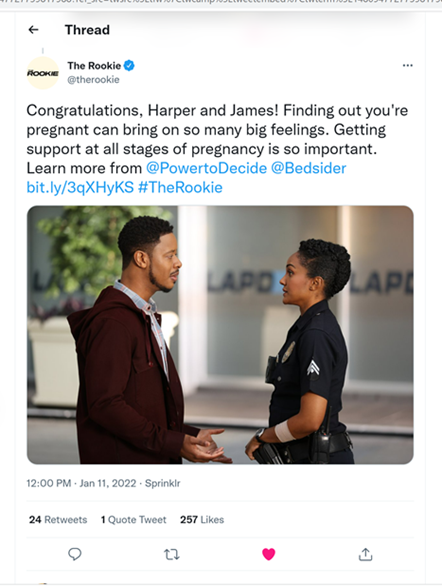 The personal dramas of the police officers on ABC’s hit dramedy The Rookie are just as compelling as the crimes they set out to solve each week. As behind-the-scenes advisors this season, Power to Decide has had the opportunity to support the unfolding storyline about Detective Harper’s unplanned pregnancy and her future with James as they prepare for parenthood. While the show covers a wide range of topics, Detective Harper is a fan favorite, and her pregnancy story is generating lots of audience response. Viewers are cheering on Harper (and actor Mekia Cox, whose real-life pregnancy is informing the story) and engaging with our online resources about pregnancy and parenthood. 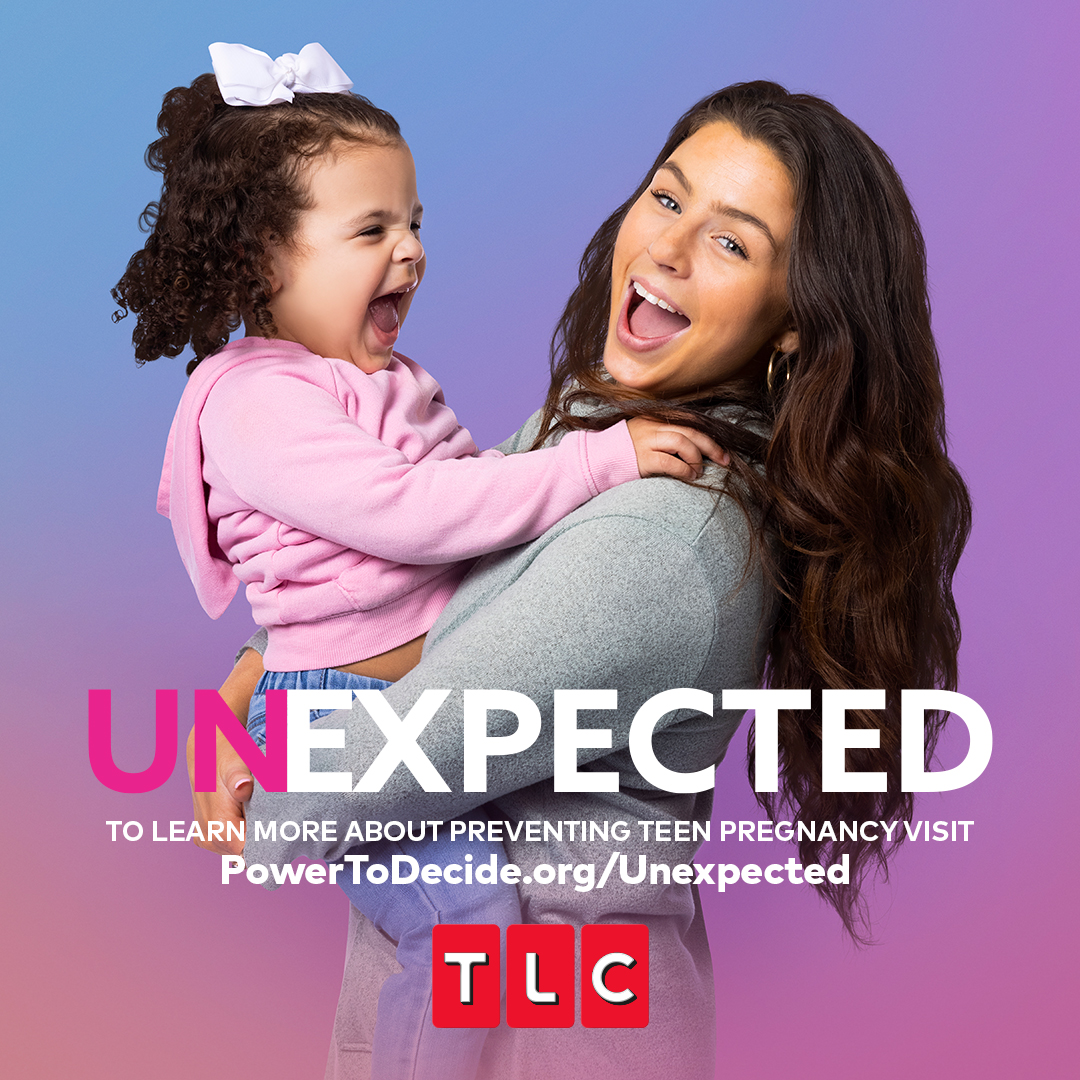 Unexpected follows the lives and relationships of young couples as they navigate the joys and challenges of pregnancy, childbirth, and parenthood—and the impact on their parents and families. All the young moms are themselves children of teen parents, which leads to candid conversations about sex, love, relationships, birth control, and what it takes to be a parent. For the fifth consecutive season, Power to Decide is proud to serve as the lead educational partner to this hit unscripted series. Together, we are creating and sharing custom discussion guides, blog posts, social, and digital content with the show’s impassioned viewers and its more than 1.3 million social media followers. Our goal is to help viewers use the show to start conversations about unplanned pregnancy with the young people in their lives, and to bring timely resources about birth control and pregnancy to viewers in real time.

The show embodies and promotes our #TalkingIsPower message, and audiences are responding: traffic to our dedicated resource page for Unexpected increased 300% in March 2021 over previous months, thanks to TLC’s active promotion to viewers. One of many such comments on Facebook: “As soon as my son got a girlfriend I bought him condoms. When they moved in together I took her to the doctor to get the implant.”

We hope you’ll tune in to these shows, join the conversations in social media with @PowerToDecide, and let us know what you think!

In a new series of 10 videos, Dr. Raegan explains the ins and outs of different birth control methods.