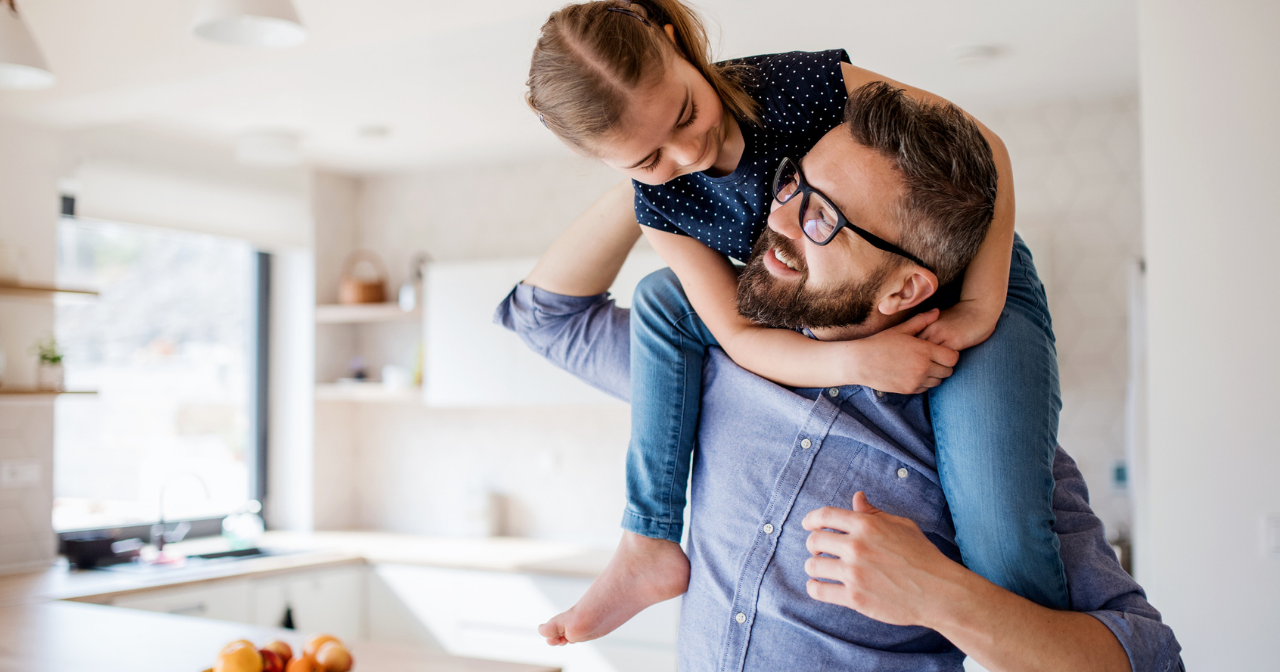 Happy Father’s Day! Everyone experiences parenting differently, but for many, fatherhood is an exciting and fulfilling journey. We know that parents are the primary resource that young people look toward for information about sex, love, and relationships. So, to celebrate Father’s Day this year, we asked three dads how they have (or plan to) talk to their kids about these important topics.

Have you begun talking about how to share toys/space; boundaries when playing with friends; or anything else?

We've started talking about sharing toys and personal space, but due to COVID-19, Josiah hasn't had much interaction with other kids. He's had a few play dates, and sometimes he is eager to share and play and other times we need to remind him to treat others how he wants to be treated. We encourage him to speak, and show affection, but we don't force him.
His mom and I are both affectionate parents and we like to hug Josiah often. Although Josiah also likes hugs and kisses, there are times when he rejects our requests for a morning or goodnight hug. This is particularly the case with dad, and while it initially hurt my feelings, we made the decision to allow Josiah to choose when and how he likes to express his affection. We even talked about the fact that it's okay to just not be in the mood to hug. When we ask for a hug and he's not in the mood we say: "okay maybe later.”

Not long ago, I dropped Josiah at my mom's house, and when we got there, Josiah refused to hug his grandma. It initially made me a little sad, and I tried to force him to embrace her, but my mom stopped me, and let him make the decision. This really helped me, because I thought I was protecting my mom's feelings, but she helped me to realize that I was actually ignoring Josiah's.

Have you and your partner talked about how you want to handle the “firsts?” First crush, first talk about sex, etc.?

Josiah is very aware of love and relationships. He loves Mickey Mouse and always refers to Minnie Mouse as Mickey's girlfriend. Right now, he is three and a little young to talk in detail about any firsts. He still thinks his mom is his girlfriend! Teaching a toddler about appropriate physical touch is important. We teach Josiah that it is not nice to hit scratch, push etc., and that certain body parts shouldn't be touched by other people.

What conversations have you and your kids had around sex, love, relationships, and birth control?

My daughters and I are very open in our discussions around sex, love, relationships, and birth control. I think it is incumbent upon the parent to take the lead in starting and normalizing these conversations. If a parent is not comfortable talking about these issues that hesitancy will filter down to the children which makes these types of conversations challenging. If you were to ask my daughters the one thing they will remember about our early discussions on these topics it was generally how I would advise them on who they date. I simply said, “find someone who treats you right and makes you feel special, that is the most important thing!”

Have they asked any questions that you think resulted in a really good conversation?

By creating a safe space (along with their Mom) for the girls to ask any question there have been some good conversations in the past. I think one of the better ones focused on when the right time to have sex with someone. I shared my perspective as a male and how some of the guys they date are just interested in having sex with them. Making sure that they are having sex on their terms when they are ready and not being pressured is one of the better conversations I have had with both of my girls.

What conversations have you and your son had around sex, love, relationships, and birth control?

I suspect my son’s answer would be: far too many.

When The Boy Wonder (that is, son Harrison) was in 9th grade, he returned from school one afternoon looking positively forlorn. A perpetually happy child, his bearing as a character from a Dostoevsky novel was instantly noticeable and notable. I spung into Dad action. The ensuing conversation went down thusly:

Dad: What’s got you down?
Harrison: Today was my worst day at school ever, ever, ever.
Dad (sensing hyperbole): Really? The worst day ever?  What about the time you…(gentle reader, you can fill in the blank).
Turns out Harrison was, as always, right. It truly was his worst school day ever.
Seems his teacher was assigning essays on various topics to students that day. Harrison was randomly assigned to write about teen pregnancy. Fair enough. Except, the teacher was also providing his students with supporting materials to help them craft their essays and Harrison was handed—by complete coincidence—something I had written on parent/child communication about relationships, sex, and birth control.

As the saying goes. Awkward.

Despite the complete randomness of the whole situation, it did engender several positive discussions.  The exact topics of the conversations mattered far less than the fact that we were having them; that Harrison could talk sex, love, and rock n’ roll with me without hesitation or fear of judgement by me.

Has he asked any questions that you think resulted in a really good conversation?

Oddly enough, it was a conversation resulting from a question Harrison asked me after becoming a parent himself that helped me to clarify what I actually thought and believed about relationships and birth control and the role of parents and other caring adults.

I realize now that in my twenty plus years navigating the mountains and valleys of reproductive health, I have spent a fair amount of time trying to assuage wondering parents and others about talking with the young people in their lives about relationships, sex, birth control, and pregnancy. My advice has remained consistent throughout the years:

Now that your son is a father, how do you hope he’ll approach these important talks?

Harrison is now a father himself with another child on the way. I hope that all his conversations with his own children about relationships begin and end with the word respect. My sense has always been that if you have true respect for the people in your life, in general, and those you are close to, in particular, conversations about relationships, sex, birth control, and pregnancy are like peddling downhill.

If you’re a father, start a conversation with your child around sex, love, and relationships. Because #TalkingIsPower. To spark a meaningful conversation today (and in the months and years ahead) take a look at all our Talking Is Power resources for inspiration.

How can young adults prepare themselves before making their own health care appointments?
October 18, 2022