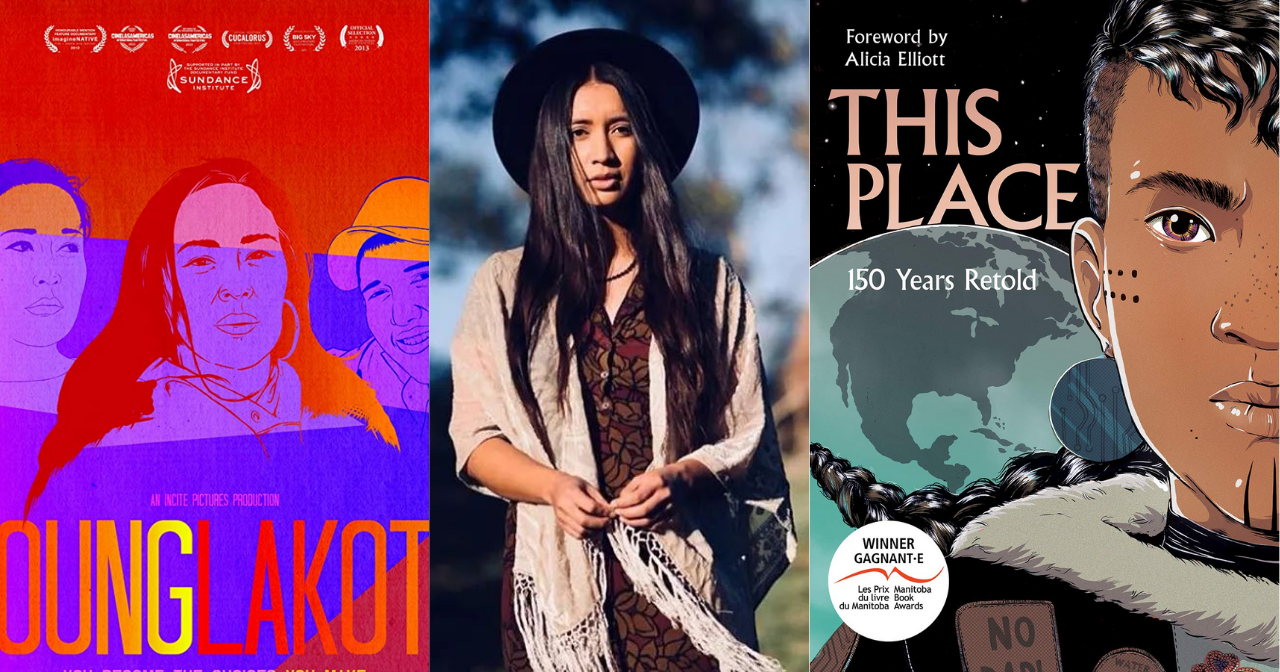 November recognizes the rich cultural traditions and histories of Native people through American Indian and Alaska Native Heritage Month. With 574 federally recognized tribes, and many more still seeking federal recognition, Native people are not a homogeneous group, but a series of diverse communities with unique cultures and practices.

We've put together a list of recommendations of 9 pieces of media that incorporate Native stories and characters as they deal with sex, love, and relationships.

This documentary follows David and Hale, two native Hawaiians finishing prison sentences in Arizona as they learn about their people’s traditions from another inmate. Upon release, the two men must mend familial relationships while continuing their journey of discovery. Out of State won Best Feature Documentary at CayFilm and the Special Jury Award for Artistic Vision at the Portland Film Festival in 2017.

Following three young people from the Oglala Lakota tribe in South Dakota, Young Lakota is a documentary exploring the complicated relationship and interconnectedness of personal choices, politics, and culture. Serena and Brandon are young single parents, while Sunny has just finished two years of college, but all three are united by a state law outlawing abortion without exception for rape or incest.

Without much to do in their community, the Navajo Nation young men of the Chinle High basketball team are determined to win a state championship. This film goes on the journey with them all while exploring their relationships with one another, their sport, and their community.

Hosted by Matika Wilbur and Adrienne Keene, this podcast explores what it means to be Native in the 21st century by diving into a variety of topics including, fashion, sex, relationships, sovereignty, and so much more. Follow All My Relations on Instagram, and listen on Spotify, Apple Podcasts, or Google Play.

Singer and songwriter Raye Zaragoza went viral with her song “In The River” about the Dakota Access Pipeline protests. A Japanese-American, Mexican, and Indigenous woman, Zaragoza has fought to love herself and to understand that she can be beautiful as a non-white woman. Her music delves into many important topics and in her most recent album, Woman in Color, contains songs which explore beauty standards, individuality, and womanhood.

A graphic novel written and illustrated by 20 Native people, This Place tells the stories of Indigenous people over the last 150 years since “Contact.” This Place won the McNally Robinson Book of the Year and the Cybils Award for Young Adult Graphic Novels. It showcases Native history in a powerful and compelling way, which encourages readers to continue thinking about the stories shared long after they finish.

The New York Times bestseller, Terese Marie Mailhot’s Heart Berries, has won a number of awards and rightfully deserved widespread recognition as a shining example of how to write a memoir which grips readers even as it educates them. Mailhot uses her life and memories as a way to explore topics such as mental health, the ongoing effects of past trauma, shame interfering in relationships, and how to take back your own story.

Author Sherri Mitchell’s book, Sacred Instructions, stems from knowledge she has gained as an elder in her tribe, as well as her experiences as a lawyer and an activist. Mitchell challenges her readers to question the way they see their world and encourages Native and non-Native readers to better understand how colonization has negatively impacted our lives.

One of The New York Times 10 Best Books of 2019, Tommy Orange’s There, There tells the fictional stories of 12 Native people traveling from different communities to the Big Oakland Powwow. The book examines each character’s relationship to their past, their communities, and their present. Together, their narratives teach the reader about modern, urban Indigenous lives.

Listen now to this new podcast that’s telling stories from the frontlines in the fight for reproductive justice.
June 19, 2022

Juneteenth provides us with a time to reflect on the racist roots of abortion restrictions.