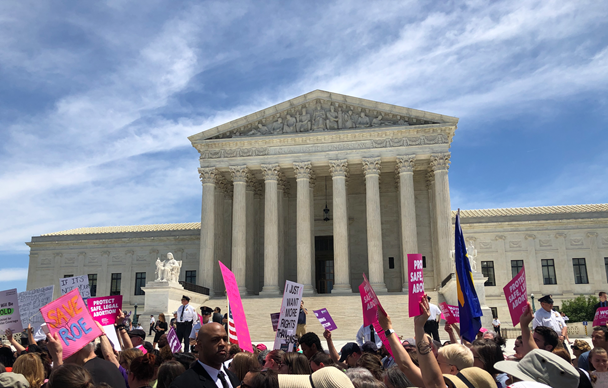 First on our list is the decision in United States v. Dennett, which led to dissolution of the Comstock Act and ultimately legalized the distribution of sex education and birth control materials through the mail. The Comstock Act, passed in 1865, allowed the postal service to open private mail to determine if it contained so-called obscene materials, and seize them. Simply put, the Comstock Act made dispensing information about sex education, birth control, and abortion illegal.

The case came about when a pioneer named Mary Coffin Ware Dennett noticed that the existing available materials on sex and birth control were inaccurate and biased. Her essay, “The Sex Side of Life: An Explanation for Young People" was published in 1918 and was eventually turned into a pamphlet due to popular demand. Dennett began to notice that not all of the pamphlets were getting delivered and was eventually notified that the content violated the Comstock Act. When her attempts to get the ban lifted failed, Dennett decided to continue mailing them anyway and was criminally charged with violating the Comstock Act in 1929.

After receiving an unfavorable decision from a lower court, Dennett appealed to the United States Circuit Court of Appeals for the Second Circuit in New York City. Because the goal of Dennett’s pamphlet was to educate, not arouse, the appeals court reversed the lower court’s decision and cleared Dennett of all charges. Although the constitutionality of the Comstock Act was not directly contested in her case, United States v. Dennett set a precedent for obscenity laws and paved the way for the Act to be dissolved. Without Dennett’s tenacity, we might not have our #ThxBirthControl and #TalkingIsPower campaigns today!

It was not until 1965, with the decision in Griswold v. Connecticut, that using birth control became legal–for married couples only that is! The case came about when Estelle Griswold, the executive director of the Planned Parenthood League of Connecticut, and Lee Buxton, a physician who served as the Medical Director for the League, were charged as accessories for criminally providing contraceptive counseling and birth control prescriptions to married couples. Because it was against the state law to use or help another person obtain methods to prevent pregnancy, they were convicted.

When Griswold and Buxton appealed, the Supreme Court ruled that a married couple’s right to use birth control privately in their home was protected by the Constitution and overturned Connecticut’s law. The Court argued that marriage lies within Constitutional bounds that protect privacy, namely the Fourth and Fifth Amendments, along with the Bill of Rights, and the Ninth Amendment.

Thanks to the decision in Eisenstadt v. Baird, single folks finally got to share in the fun of legal birth control! The case came about after reproductive rights activist William Baird gave a lecture on accessing birth control and abortion at Boston University in 1967. Well aware that Griswold v. Connecticut only protected married folks’ right to contraception, Baird vowed to test the law in Massachusetts at his upcoming speech through the B.U. News. Baird arrived to deliver his speech to more than 1,500 students (and three vice squad officers) in attendance. He told his audience that the only way to push for meaningful change was to bring the case to court. After distributing one condom and vaginal foam to a female student, he was promptly arrested and charged.

Unsatisfied with this decision, Sheriff of Suffolk County, Massachusetts Thomas Eisenstadt appealed to the Supreme Court. But much to his dismay, the Court upheld the First Circuit Court of Appeals’ decision, declaring that the right to privacy from the government applied equally to individuals, whether they were married or single – giving even more folks the power to shout, “Thanks, birth control!”

Just one year after Baird’s win, the Supreme Court ruled in a landmark abortion rights case, Roe v. Wade. “Roe” was used to protect the identity of the young Texan woman named Norma McCorvey whose quest for an abortion brought the case into the courts. At the time McCorvey sought abortion care, it was only legal in Texas to save the life of the mother. Out of options, McCorvey unsuccessfully tried to get an abortion through illegal channels and turned to Texas attorneys Linda Coffee and Sarah Weddington to file a lawsuit against the district attorney of Dallas County, Henry Wade.

In 1970, a Texas district court ruled against the state’s abortion ban, saying that it violated the constitutional right to privacy, but the case was appealed to the Supreme Court. Before her case reached the Court, McCorvey gave birth and gave the child up for adoption.

In a subsequent case, Casey v. Planned Parenthood (1992), the Supreme Court affirmed the basic holding of Roe v. Wade that the state is prohibited from banning abortions before “viability.” However, the Court also stated that the state can pass laws to regulate abortion but that any regulation that imposes a "substantial obstacle" preventing a person from obtaining a legal abortion is an "undue burden" that violates the constitutional right to an abortion. Courts have been ruling on what constitutes undue burden ever since.

Now, 49 years since Roe v. Wade 30 years after Casey v. Planned Parenthood affirmed a constitutional right for people to decide their own futures, the legal right to abortion is back at the Supreme Court in the case of Dobbs v. Jackson Women’s Health Organization. Analysis from the Guttmacher Institute shows a total of 1,338 abortion restrictions have been enacted since Roe v. Wade was handed down in 1973—44% of these in the past decade alone. As a result of these and more recent attacks on abortion—such as Texas’s 2021 ban, SB8, which bans abortion care after six weeks of pregnancy—people across the country often face overwhelming barriers in their search for basic health care.

Building on the decisions from Griswold v. Connecticut and Eisenstadt v. Baird, Carey v. Population Services International ruled against a New York law that forbade the advertisement and display of birth control methods to the general public. The law also required that those getting contraception must be over 16 years old and go through a licensed pharmacist. New York claimed that Population Services International violated the restriction by distributing information and services about birth control, along with advertising in college newspapers and magazines.

The lower court ruled that the New York law was unconstitutional – which the Supreme Court upheld. They explained that birth control methods that don’t contain hormones, like condoms, do not need to be dispensed through a pharmacist. Additionally, they struck down the age requirement and advertising restrictions.

Everyone has the power to activate and make a difference. Every Tuesday check back for a new call to action!
January 30, 2023

Today, Power to Decide applauded the U.S. Representatives who introduced the Equal Access to Abortion Coverage in Health Insurance (EACH) Act.