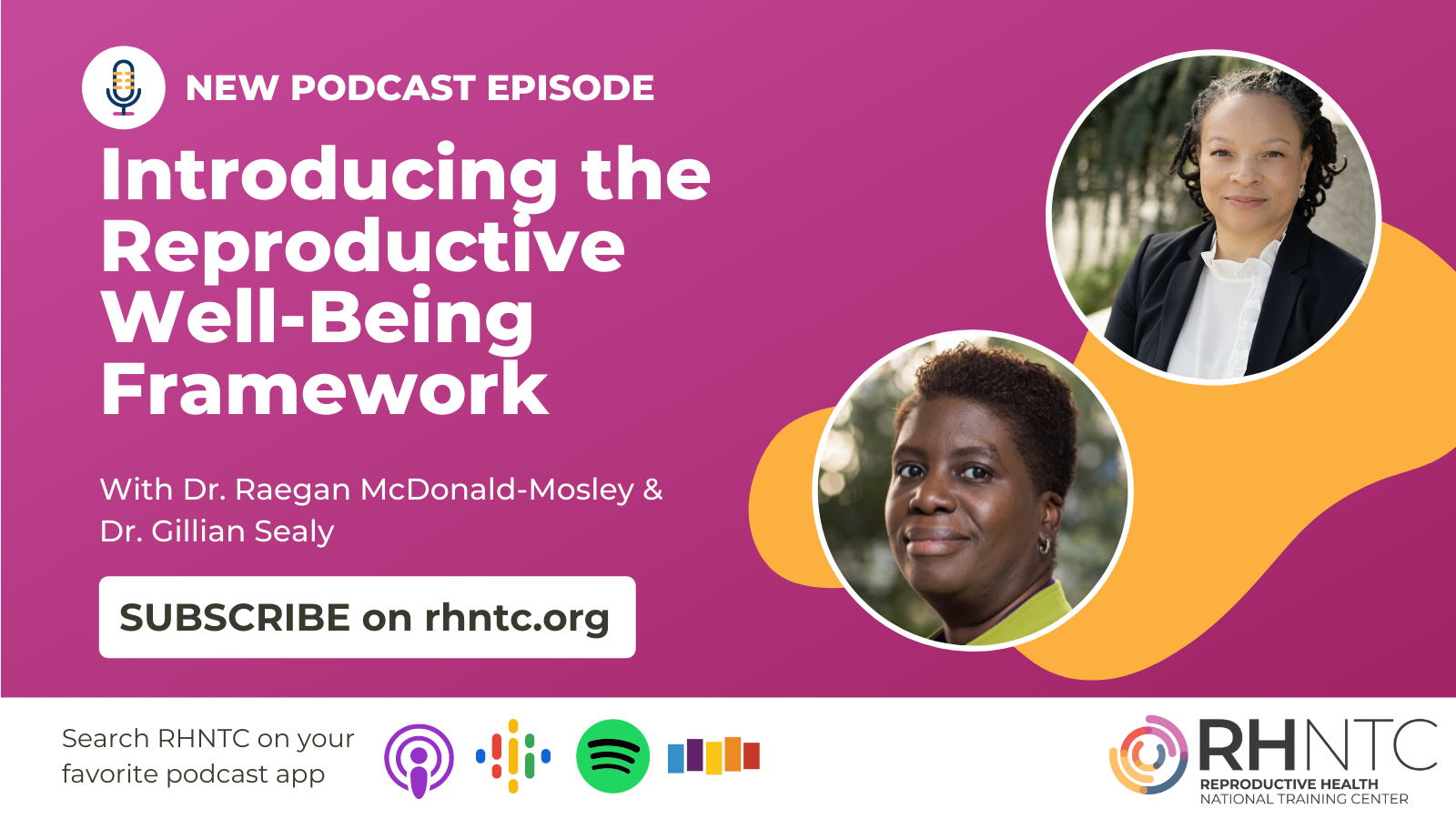 Reproductive well-being means that all people have the information, services, and support they need to have control over their bodies and to make their own decisions related to sexuality and reproduction throughout their lives. We envision a culture and system of support that makes it possible for every person—no matter who they are or where they live—to achieve the reproductive outcomes they want, whether or not they have children; and for those who do want a child, ensure healthy outcomes for themselves and their families. To improve reproductive well-being for all, we have been working with more than 40 national, state, and local organizations to build a nationwide Reproductive Well-Being Movement.

In a new three-episode podcast series from the Reproductive Health National Training Center, our CEO, Dr. Raegan McDonald-Mosley, and Chief of Staff, Dr. Gillian Sealy, (plus some special guest stars) dive into the Reproductive Well-Being Framework. Check out our favorite moments from each episode as a teaser for all that you could learn:

“Look, I think we have a big tent. We want to make sure that reproductive rights, justice, and health are walking alongside us as we build out this framework. Not just for communities, but for systems, because we want to make sure that systems are also developed so that they can support an individual's rights, their justice, their health, as it relates to reproductive well-being.” -Dr. Gillian Sealy.

Episode 2: Setting the Foundation: The Four Pillars of Reproductive Well-Being

“Narratives influence what people think and believe, they shape their mindsets, and they also inform what people do, their actions. Narratives influence cultural norms and expectations. Sometimes narratives emerge organically over time, but more often, they're intentionally created or sustained. And that's often to protect power or the status quo. So that makes narrative change a very powerful tool for social movements, because it allows them to assert a new reality, a new explanation or expectation or assumption about how the world works.” -Jennifer Messenger, Senior Executive Vice President at the Metropolitan Group.

Episode 3: Shifting the Paradigm: A Vision for the Future of Reproductive Well-Being

If reproductive well-being were fully incorporated at the community level, “that would mean that people, regardless of social structure, are not disadvantaged when they're seeking to achieve optimal health. It would mean that we would break down the silos in the health care system and see sexual and reproductive health as really part of overall health care. It would mean that to achieve health equity, we would acknowledge that for some groups, they've been disproportionately affected by poor health outcomes, including in maternal and infant health. And what that would mean is that we would need to put a system of support in place to address and rectify this. It would also mean that for some, it wouldn't just be relegated to individual choice or a random occurrence, but really to look and acknowledge systemic barriers that affect a person achieving reproductive well-being.” - Dr. Gillian Sealy.

You can find the podcast and subscribe on Apple Podcasts, Spotify, or wherever you listen.

We're proud to join with other reproductive health organizations in applauding the introduction of the Enhancing Questions to Understand Intentions for Pregnancy Act
July 29, 2022

A round-up of interesting articles about sexual health from the last month.
June 29, 2022

Power to Decide featured in AJPH

A new article published in the AJPH explores the innovative reproductive well-being framework, developed by more than 50 organizations.