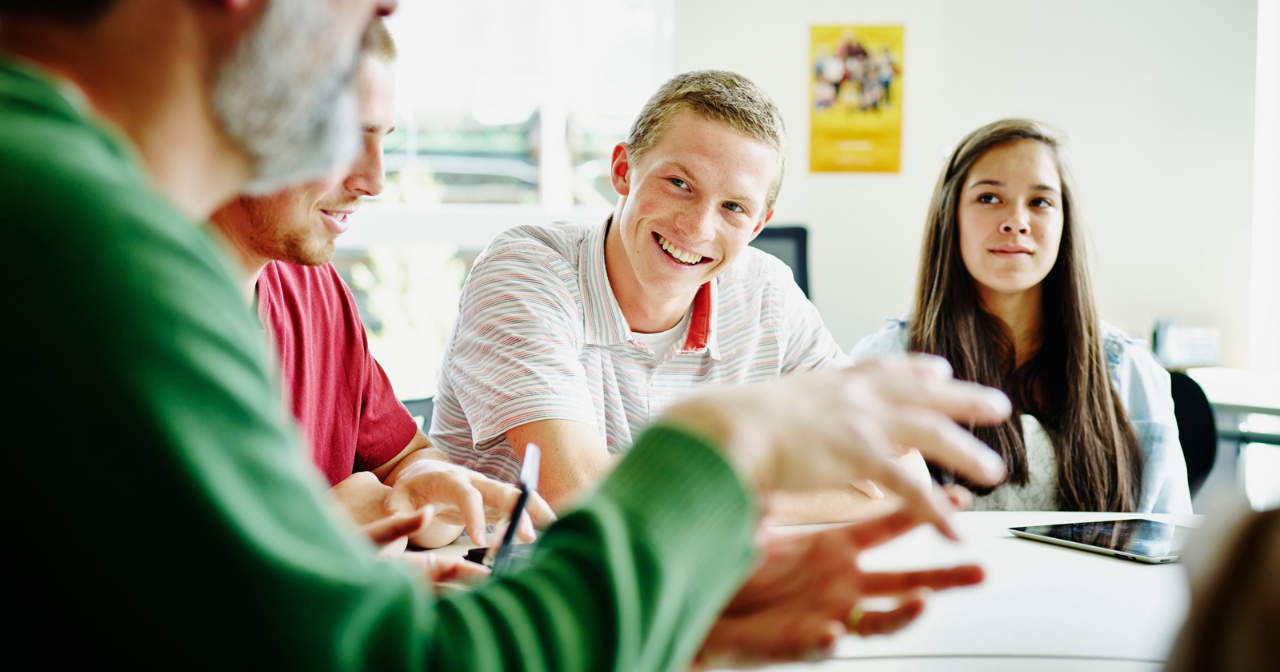 As a senior at a small Quaker school outside Philadelphia, I had the choice to sign up for an elective. Strangely, but also perhaps because I was so shy and uncomfortable in my own skin, I signed up for a class called Sexuality and Society. None of my closest friends chose this elective, and as the fall grew closer, I felt more and more nervous. How could I communicate with peers about sex if I couldn’t raise my hand in any other (less awkward and vulnerable) classes?

Now, at 24, I tell everyone that this class shaped my life and helped me find my true passion. My teacher, Al Vernacchio, encouraged me to speak up, helped me find my voice, and was the first person in my life who told me that I could be a leader. Since high school, he’s become a mentor and friend, and I recently got to catch up with him. We talked about all things comprehensive sex education. After experiencing his class first-hand, it was awesome to hear some of the behind-the-scenes planning and feelings behind one of the most memorable experiences of my teenage years.

When I asked Mr. V why he wanted to teach sex ed he shared:

“For two reasons. One is, I’ve always been a person who felt very comfortable talking about human sexuality. And it was clear to me that not everyone was like that, and so I thought that since I had that ability, one of the ways to put it to use was to help other people be able to have these conversations and talk about this stuff which is so essential to discovering one’s self, their authentic self. The other reason is that there is so much misinformation and so much lack of knowledge out there, and that hurts people. It hurts people who are LGBTQ+, it hurts people who are gender non-conforming. And good education can create a world that is more open, more free, more loving, more just.”

On the first day of Mr. V’s class, we wrote down our favorite and least favorite sex-related words, and then read them aloud. I still remember “moist” as the most frequently disliked word. That day, we broke down any self-consciousness and hit the ground running. Our unit on language was fascinating. Following this introductory icebreaker, we deeply explored the words we use to talk about our bodies and why. We came into class one day to find huge posters throughout the room with words like “vulva,” “vagina,” “penis,” “scrotum,” “breasts,” “butt,” and – to our surprise – “foot.” One of these things was not like the other! But once we were directed to fill the posters with every euphemism we had ever heard or used for all the body parts, the reason for the inclusion of foot became glaringly clear–there were no euphemisms, because no one is uncomfortable saying “foot” out loud.

After years of calling sex, “the three-letter-word,” when I got home, the floodgates opened. I asked my parents about all the euphemisms they’d heard, and we ended up talking for hours. How did I manage to get to this place of comfort with discussing pornography, pubic hair, even masturbation, with my parents?! Mr. V gave us the tools we needed to start talking. As the weeks turned into months, the cafeteria became a make-shift human sexuality class. As Mr. V said, “There’s way more kids who have taken the class than who have sat in the room.” My friends would gather to catch up on the latest classes and activities, from making genitals out of playdough, to discussions of why pizza is a much more inclusive metaphor for sex.

Sexuality and Society was the beginning of a conversation where my voice mattered. Reflecting on my choice of elective now, I know that I was drawn to the subject because of deep feelings of shame that I was unable to express. I carried around immense guilt about my body, pleasure, what I looked like, and who I liked. In that room, I was able to start letting go of those burdens, in the community of my peers. I learned how to talk to people I disagreed with in that room. I felt safe, I felt heard, and I felt excited to go to class every day.

As our chat ended, I asked Mr. V what he would share with people who don’t have access to his type of sex-ed, he told me:

“On the one hand, what I want people to know is that they’re normal, and worthy of love. And that the most important thing for them is to be able to be their most authentic self, whoever that is, because I think those are messages that are inherent in comprehensive sexuality education. I think very often, folks who don’t get that kind of information don’t get those messages, so that’s important.

“But I also think I want people to know that comprehensive sex education is really just designed to help people become their best selves, through information. I teach information, I teach skills. And through that information and through those skills, I want to invite people to broaden the way they think about the world and themselves, and to find their truth. I think that there may be some other people in the field who might answer that question more along a strictly content line, like people should know how to use condoms, how to keep themselves sexually healthy, but I believe really, at its root, comprehensive sexuality education is less about sex than it is about becoming.

“And I think that’s an answer that will probably scare people who are not fans of comprehensive sex ed. That can sound kind of scary. But it’s meant to be a very gentle, loving, invitation. Not a set of rules and strictures that people need to memorize and adhere to. So maybe that’s the most important thing. Making sure people understand that comprehensive sexuality education is not indoctrination, it’s an invitation.”

Some of Mr. V’s favorite websites:

Anna Sorensen got her B.A. in Women’s, Gender & Sexuality Studies and Spanish from The George Washington University. As a Digital Programs Fellow, she gets to use her passion for reproductive justice and health equity to help patients throughout the U.S. find contraceptive care.

real story
Sex Ed for All
Talking Is Power

There are many reasons someone might want to use more than one birth control method!
November 7, 2022

Every month Dr. Raegan answers questions about birth control, sexual health, and reproductive choice on social media. What questions has she answered lately?