Consent At Every Age: #TalkingIsPower 2018

Consent At Every Age: #TalkingIsPower 2018 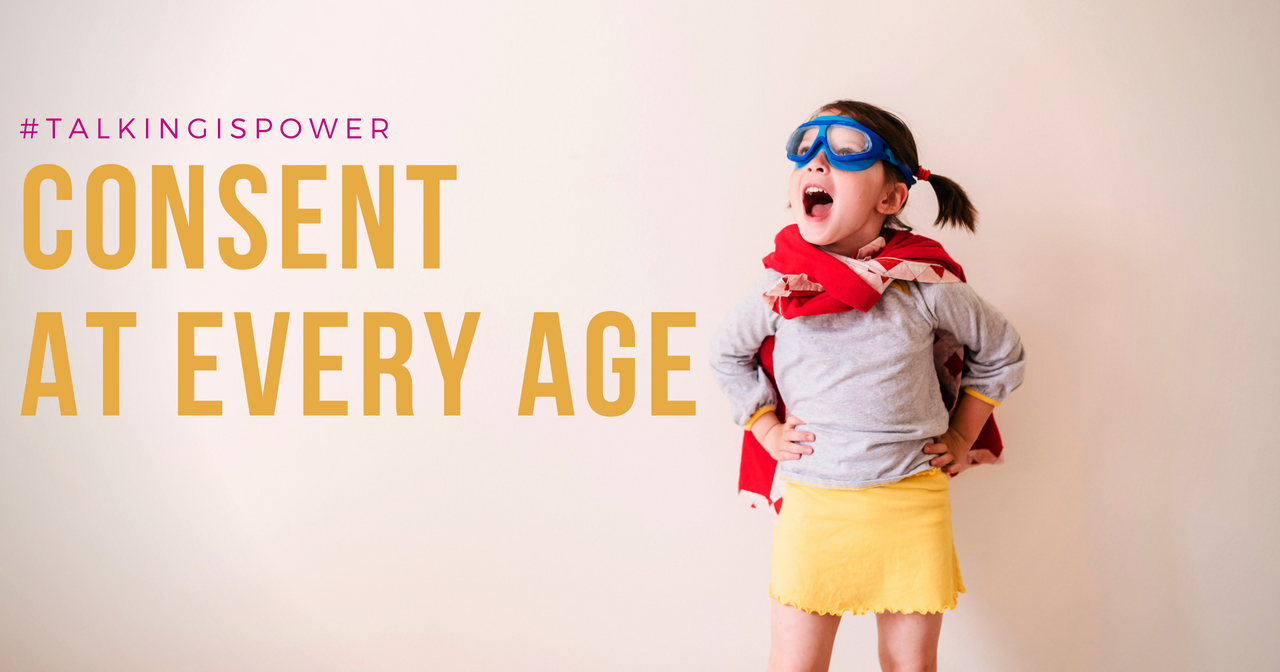 At long last, the #MeToo movement has opened up the national conversation on consent. Did you know that a healthy understanding of consent actually starts during childhood? Learning not to take another kid’s toy without asking, that hitting is not OK, and how to negotiate with another person—these are all fundamental skills that empower your young person’s ability to give or deny consent later in life. Preparing your child and other young people to communicate what they do and don’t like helps them build a foundation to understand and respect the consent of others and themselves. Wondering how soon should you begin? Right now! Talking to your young person both early and often is powerful and impactful. Here are a few examples of how teaching consent differs at every age:

As they grow into their independence, toddlers will begin to set boundaries for themselves around other people. Parents are the first line of defense in teaching young children about consent. For example, you may hear your child say, “No hug!” or “No kiss!” Forcing children to hug or kiss people against their wishes has the negative effect of showing them their consent does not matter.

While parents sometimes feel embarrassment over their toddler’s vocal refusal of affection, adults should respect children’s requests not to be embraced. That could mean stepping in and reiterating your child’s “No” to a pushy adult. It could also mean helping negotiate a compromise like a high five or fist pump. This respect also applies to parents—respecting your child when they aren’t in the mood for a hug will send the message that their body is their own.

Although toddlers have a growing appreciation for the power of the word “no”, they are still learning how to respect others. Explain to your child gently but firmly that they must not touch others when asked not to. It takes a lot of repetition! But it’s important for them to begin to learn that consent is a two-way street—others should respect them and they should respect others.

As your child enters school age, they will meet many new people and have many new experiences without you there to supervise them. It’s a big step for both guardian and child. Preparation for this moment begins years in advance, of course, but your child may still encounter challenges neither of you expected.

Many parents know to warn their kids against inappropriate sexual touch. They should not touch anyone else’s “private parts,” and no one should touch theirs. Situations that make them uncomfortable in a threatening way must be told to a trusted adult immediately. But what about less alarming occasions where a young person might feel uncomfortable with a touch that seems non-threatening?

For example, if two children are playing on the playground and one begins to tickle the other under the arms, the child doing the tickling may not see anything “wrong” with it. Even if one child laughs, but says, “Stop tickling me!” children must learn to heed words like “stop,” and “no” from their classmates. Tell your child they have the right to ask other people to stop tickling, poking, or touching them in any unwanted way. Help them understand that saying, “I was just playing” does not excuse unwanted touch.

The transitional time between preteen years and early adolescence can be full of changes for children. Young people undergo rapid development physically and emotionally during this stage and can sometimes feel awkward about themselves. They are also starting to experience greater curiosity about their classmates’ changing bodies. That curiosity, combined with peer pressure, can lead to inappropriate incidents within a school setting.

Middle schoolers across the country are familiar with informal social rituals such as “slap-a** Friday,” where students will run through the hallways pinching or slapping each other on the breast or butt or groping private parts. Your child should understand this is a form of sexual harassment and assault and is completely unacceptable. The pressure to laugh off slapping and groping as a harmless game could lead to young people inappropriately touching others as they get older. Treat it seriously, and your student will as well.

By the time your young person reaches high school, hopefully, they’ll have a good grasp on consent because you’ll have kept the lines of communication open throughout their younger stages of life. But even seasoned adolescents have more to learn about consent. At this age, they may have a boyfriend or girlfriend. Don’t freak out! Regular contact with a romantic interest is a healthy, normal occurrence for teenagers. As parents, champions, and mentors, use the opportunity of your young person’s relationship to revisit some fundamentals on respecting boundaries.

For example, if two teens who are dating like to hang out a room alone, one or both teens might feel that in that situation they must automatically become physical. Be sure to tell the young people in your life that being alone with someone in no way gives consent to sex or other touching. Also, teens should understand they must not touch anyone without consent—even if that person is their boyfriend or girlfriend and even if they’ve been physical with that person before.

Each stage of childhood and young adulthood provides parents, champions, and mentors with diverse opportunities to teach young people about consent. The task may seem intimidating at first, but don’t worry! Making each lesson age-appropriate will help your child to understand at their age what is and isn’t inappropriate. Teaching consent at the sandbox will lay a foundation for consent prom and later in the workplace. Your young person will be grateful you took the time to teach them.