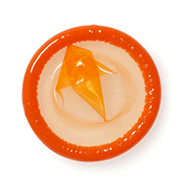 Rubber. Jimmy-hat. Love sock. Wrapper. However you say it, condoms are one of the most popular forms of birth control out there. They slip over the penis to prevent pregnancy and lower the risk of STIs by keeping sperm inside the condom and out of the vagina. (There are also internal condoms that go inside the vagina.) Condoms come in hundreds of shapes and sizes, with lube and without.

Women and men who are sensitive to spermicide can use spermicide-free condoms. Condoms have very few side effects. This type has even less.

Elastic fantastic latex can stretch up to 800%. These are the most common condoms. But don’t use them with oil-based lube. They can break or slip off if you do.

Allergic to latex? Prefer oil-based lube? Then these are for you. Usually made from polyurethane, other synthetic high tech materials, or natural lambskin.

Want to stay in the know about what we're working on and advances in the world of contraception and sexual and reproductive health? Sign up for our monthly newsletter, Power Pulse.

Thank you for signing up!

A round-up of interesting articles about sexual health from the last month.
View All Birth Control Content