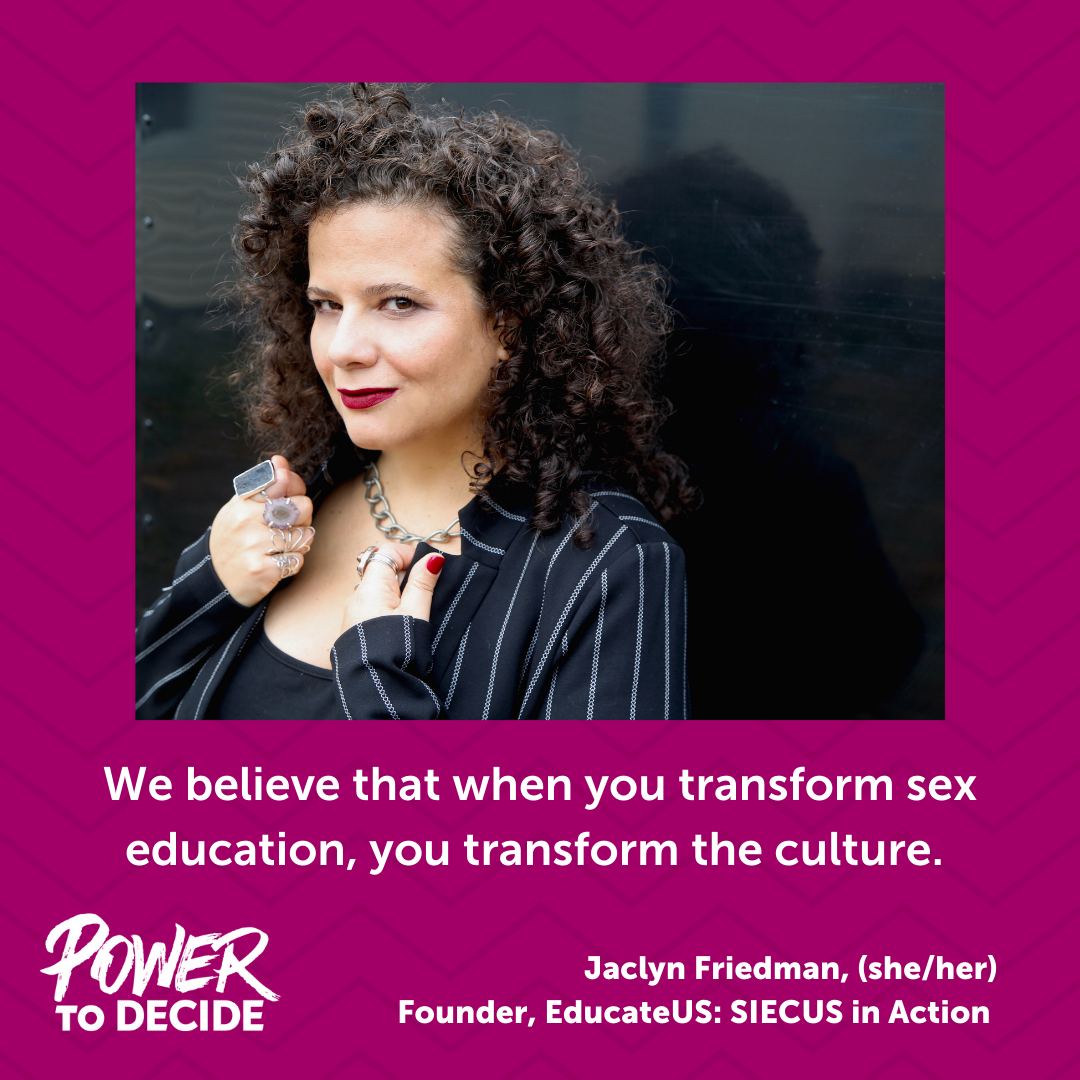 At Power to Decide, we’re committed to uplifting the many individuals on the ground doing the work that matters most. Each month we highlight an individual who is championing the effort to support young people’s reproductive well-being. Check out this month's Power Player profile.

What work have you done to ensure that all people have the information and access they need to make decisions that align with their intentions and improve their reproductive well-being?

I started off as an anti-sexual violence activist. I quickly really came to understand that if we want to address sexual violence, we have to address the sexual culture violence takes place in. That’s when I collaborated with Jessica Valenti on the book Yes Means Yes. The work that I did afterwards, advocating for the idea of affirmative consent, really helped popularize that idea. So I spent a chunk of my career really pioneering, understanding, and moving our understanding of consent forward. I'm really proud of the impact that that has had. I’ve published three other books since then all of which are about addressing the question of how we shift the sexual culture in one way or another.

But what I'm doing now that I'm really most proud of is launching an organization called EducateUS, which is building a movement of sex ed voters around the country. Our purpose is to make sex education policy a litmus test issue. We know that most people want there to be good quality sex and relationships education in schools. When you poll on it, the polling numbers are like 80-90%, in support. The huge majorities around the country are everywhere, in neighborhoods that you might not suspect. It's not just in the blue states that really want there to be equality, sex, and relationships education in public schools. But there just isn't a lot of political muscle behind the movement yet so I'm trying to build that and figure out the most effective tactics and strategies for the organizers who are already on the ground in their own communities around the country working on this issue. We believe that when you transform sex education, you transform the culture.

How did you get started in your field? What is your driving force?

It was a series of moments that got me started. I was actually doing anti-rape activism on campus when I was an undergraduate before I was sexually assaulted. People tend to assume because I'm a survivor that was the inciting incident and it wasn't actually, it was already an issue I cared about as a woman—as a person, a human. But surely having that experience really lit a fire under me. It just made me feel like advocacy was a way to put some of the feelings that I was struggling with after the assault to good use. Instead of feeling helpless, if I worked on trying to make things better for other survivors or to prevent sexual violence, it was a way of taking my power back.

What advice would you give to someone looking to effect change in the field that you currently work in?

On EducateUS check out Take Action in Your Community where you can put in your state and some basic information and we’ll send you an email about what's happening in your state. There's great organizing happening around transforming sex education in many places around the country so, I really encourage folks to start by finding out what's already happening near them. If nothing's happening near you and you want to make something happen, reach out to us directly. Our purpose is to work with folks who want to make change where they live, and to figure out what you need to make your activism impactful. We never want to come into a community and say, “We're here to change things.” We only work in places where we're invited and only with organizers on the ground leading.

The other organizing advice I like to give people is to figure out what you love to do and then figure out how to put that to use for the movement. If you like to bake you can hold a bake sale to raise funds. If you like hosting parties, you can host an info party or you can host a fundraising party. I like to say that theater kids make really good protest organizers because direct action involves a lot of theater. Anything that you like to do is something that can be put to use for change. And when we do things that we enjoy doing as part of our movement work we're going to stay in the movement longer. We all need to be willing to do some stuff that makes us uncomfortable too. But if you can figure out what brings you joy and helps the movement, that's the sweet spot.

Why should someone care about ensuring that all people—regardless of who they are or where they live—have the information and access they need to live their best life?

It's about creating a world where we care about each other, where we all have what we need to love and be loved in healthy ways. For me, it's about creating the world I want to live in. I want to live in a world where we all recognize each other as co-equal human beings across difference. A world where we look after each other. For me, it’s about love because the alternative is division and fear. Certainly, we've seen in the last couple of years with the pandemic what happens between folks who are here for making sure everyone has what they need and taking care of each other and folks who think the only thing that matters is what they personally need. You have a choice of which world you want to live in.

Power Player
Sex Ed for All