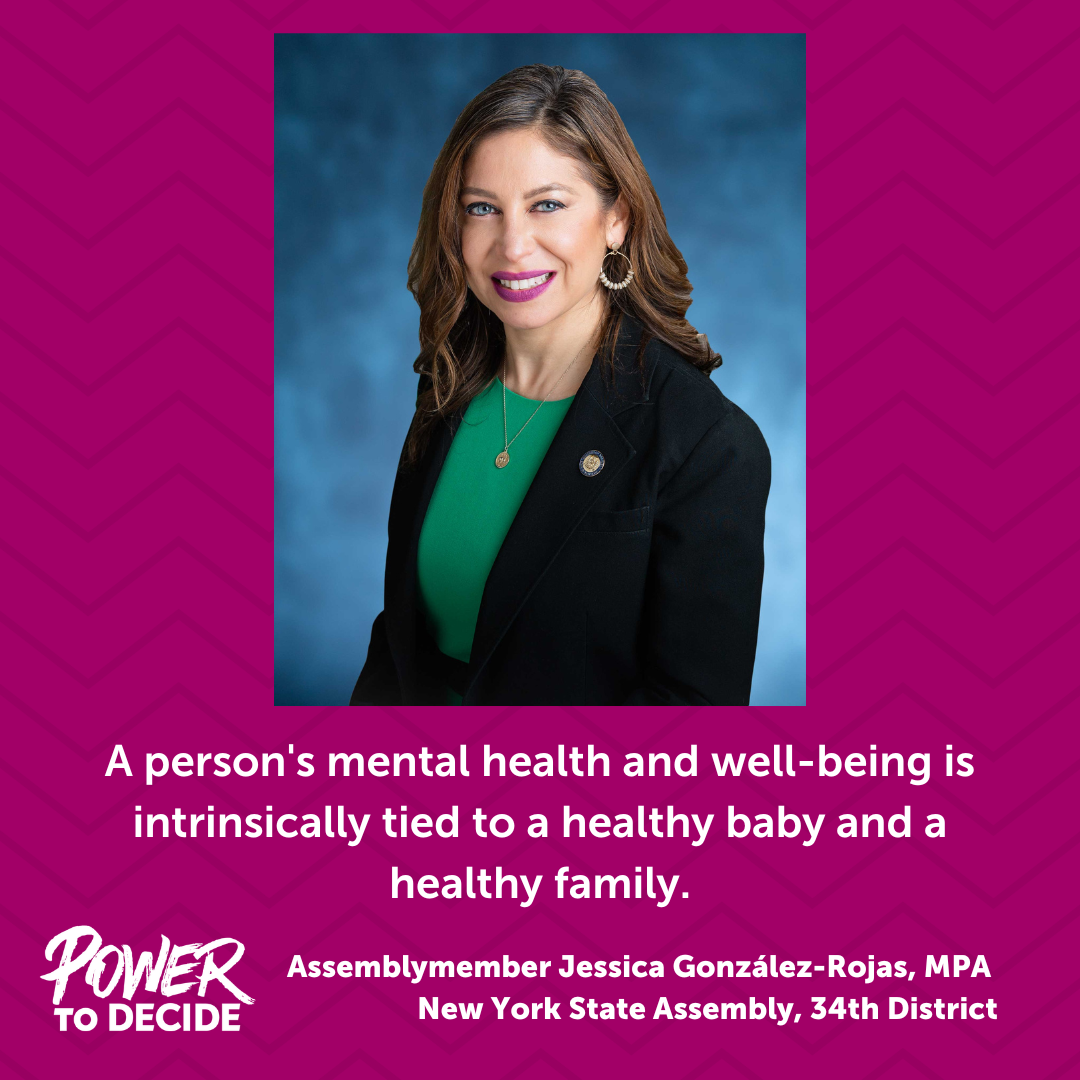 At Power to Decide, we’re committed to uplifting the many individuals on the ground doing the work that matters most. Each month we highlight an individual who is championing the effort to support young people’s reproductive well-being. Check out this month's Power Player profile.

What work have you done to ensure that all people have the information and access they need to make decisions that align with their intentions and improve their reproductive well-being?

I've dedicated my life to the fight for reproductive justice. Prior to running for office in 2020, I led the National Latina Institute for Reproductive Justice, which is an organization that works with Latinas, their families, and their communities to advocate for health, dignity, and justice in order to make decisions for themselves, their families, and their future.

All the work that I've done over the years have been rooted in reproductive justice analysis. It wasn't about simply fighting for the right to an abortion or the right to contraception or the right to health care, but actually looking at all the conditions that impact a person's ability to access those rights. Whether it was their immigration status, the language they spoke, their socio-economic status, their gender identity, their race, ethnicity, so on and so forth. The work I've done has very much been grounded in community organizing and consciousness-shifting related to building power in our community. While I got to travel around the country and do policy advocacy, the most powerful part of the work was providing community members with the tools to be their own best advocates because that's how we create change.

We wanted Latinas to know that despite their immigration status, or the language they spoke, or how much money they had in their pocket, they were the bosses of their elected officials, and they deserve to be heard. They had the right to be heard. They can go to their local, state, or federal representatives to fight for access to reproductive health care. That's literally been my life's work. And I miss it dearly. But I get to do that work from a different perch as a state assembly member in New York, which is incredibly exciting.

Since the overturning of Roe v. Wade, states like New York have been as critical as ever to protect and uphold abortion access in this country. Just days after the Supreme Court decision was leaked, I introduced the Reproductive Freedom and Equity Fund Act, which would provide dedicated funding for capacity-building support for clinics, coverage of uninsured and underinsured patients, and practical support for patients, such as travel, child care, hotel, and other needs that often present barriers to access abortion care. In addition, I introduced legislation that would provide all students in New York’s colleges and universities free access to medication abortion. Back in April, my bill, the Reproductive Equity Act, was rolled into the budget language that was successfully signed into law. It requires all private insurance coverage for abortion care where maternity care is provided, without annual deductible, co-insurance, or co-payments.

Finally, I was successful in getting two maternal health bills signed into law. Maternal mental health is really critical because in the spectrum of reproductive justice and reproductive health, it's not just about preventing pregnancy, it's also about ensuring healthy pregnancies. A person's mental health and well-being is intrinsically tied to a healthy baby and a healthy family. One of my bills creates a more culturally competent post-partum screening system because most screening systems are based on the realities of white, more privileged women and don't take into account some of the cultural competency needs such as language access and socio-cultural realities that women of color, Black women, immigrant women, gender non-conforming, and trans men face. Another maternal health bill that was signed into law requires education regarding preeclampsia and was named after a maternal health advocate who died from the condition shortly after giving birth to twins. I was also successful in getting a number of LGBTQIA justice bills signed into law, as well as a bill that protects survivors of sexual misconduct in the workplace. I'm not just talking the talk; I'm walking the walk and fighting the fight to make sure that we ensure justice for every New Yorker.

How did you get started in your field? What is your driving force?

In terms of reproductive justice work, an interaction I had at a clinic in college got me started.

In 1995, I went with my partner to get birth control. I accidentally passed the clinic—a Planned Parenthood near my college campus—because there was a giant crowd outside. As I passed by the clinic, I wondered “what's that crowd for?” Then I realized that was the address of the clinic where I had an appointment. I was literally attacked outside the clinic when I tried to enter it; I was spit at, I was yelled at, people tried to grab me and tell me not to do it. I didn’t understand what was happening. There was a moment when I got to the door that I realized what they thought. They thought I was going to get an abortion. I almost wanted to scream, “I'm just getting birth control!” But it shouldn’t matter why I was going to Planned Parenthood. It was my body and my decision to get the reproductive health care I needed.

I was so shaken up and scared, but when I finally sat in the waiting room, I became really angry and emboldened to become an activist to prevent this from happening to others seeking health care. This is what I experienced as a Latina with privilege: I'm light-skinned, I speak English, I was in college at the time, and I had health insurance. For someone like me to experience that with the privileges I have, I could imagine how much worse the experience would have been for someone who may be undocumented, uninsured or didn't speak English.

While I've always been committed to gender justice, I think that that made me really want to fight for Reproductive Justice. It was critical to look at access to reproductive health through a lens of communities historically marginalized from the health care system due to race, gender identity, immigration status, socioeconomic status, etc. I got a job at the National Latina Institute for Reproductive Justice where I started as the Director of Policy and Advocacy before becoming the Deputy Director, then Executive Director. It was a culmination of my life's work advocating with immigrant and Latinx communities and focusing on reproductive and gender justice.

But I decided to run for office after 13 years at the organization because a lot of our advocacy was working with state legislatures, including some hostile states. Ultimately, I felt like we needed better legislators who were true advocates for reproductive justice, even in a state like New York that is much more progressive.

What advice would you give to someone looking to effect change in the field that you currently work in?

First, tell your own story, and connect with advocates and organizations and community spaces that could elevate your story. Then look at what's going on in your state. What legislation is on the docket? Call your elected officials. We get calls all the time. It's not a big deal. It's not scary. It's generally a kind person answering the phone acknowledging your opposition or support for a bill and tracking that. So, call your state elected officials, especially as we have witnessed the terrifying rollback of Roe and other progressive policies that were hard-fought over the years. It's really up to the states to protect reproductive justice and access to everything from sex education to contraception to abortion care. In addition, you can volunteer. Find a clinic and get trained to be a clinic escort to help those patients like me that need to get through a vicious crowd to get to the door. I had to fend people off myself. But you can be a compassionate escort to the clinic so that people feel safe, whether they're getting contraception or abortion care. Finally, look up your local abortion fund and donate. In many states, especially hostile states, there's funds that cover abortion care to help pay for people to travel or help host people that need to travel to your state if you're friendly state. They do such great work, and they are an incredible group of people who need support too.

Why should someone care about ensuring that all people—regardless of who they are or where they live—have the information and access they need to live their best life?

A healthy person leads to a healthy family, which leads to a healthy community. I think coronavirus has taught us that everyone's health is inextricably bound to one another. Your reproductive well-being is an essential part of your well-being in general, no matter your gender identity. And it's so critical to ensure that everyone has full access to culturally competent, medically accurate, affordable, accessible health care and is able to decide if, when, and how to create a family. It’s so tied up in someone's ability to succeed and thrive in society. It's a universal human right that I wish more people would understand. That's my gospel and it’s the work that I do every day.

Sunday marks what would have been Roe’s 50th anniversary. Instead of celebrating this milestone, we’re fighting for reproductive well-being.
January 20, 2023

New maps from Power to Decide’s Abortion Finder provide a compelling illustration of the terrible new chapter for abortion access.