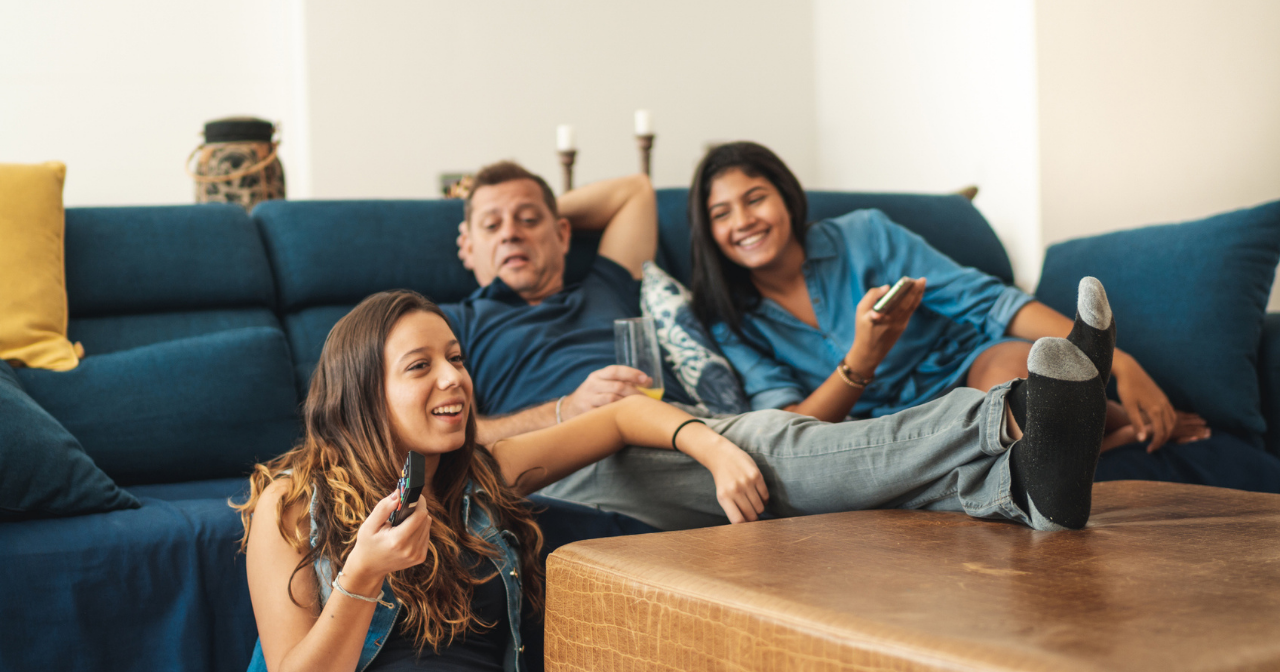 We know that research shows young people want to hear from their parents and other adults in their lives about important subjects such as sex and love and how to navigate it all. We also know that relating to TV shows and movies that cover some of the more “uncomfortable” topics can be a great place to start that conversation!

With the weather getting colder, and the CDC continuing to encourage COVID-19 safety precautions, now is the time to start streaming a new binge-worthy show! We gathered four TV series that parents and their teenagers can check out (alone or together) to spark honest, open conversations about important topics:

The Sex Lives of College Girls

From the mind of Mindy Kaling, The Sex Lives of College Girls follows freshmen roommates Bela, Kimberly, Leighton, and Whitney as they navigate the freedom to explore their sexualities away from their parents. Each of the characters’ unique experience offers a fresh and realistic take on the actual hardships that folks in Gen Z are facing as they mature. The first season is full of relatable moments about first sex, maneuvering hook-up culture, and figuring out how to balance your life during college. The girls are also there for each other as they experience heartbreak, come to terms with their sexuality, and even gather the courage to speak up about sexual assault. Thankfully, the series was renewed, so we can look forward to even more conversation starting moments from our favorite Essex roommates! Stream every episode of the first season now on HBO Max.

Never Have I Ever

Another widely successful show by Mindy Kaling that accurately portrays relatable scenarios for young people who are figuring themselves out is Never Have I Ever. The story follows Devi Vishwakumar, an Indian-American Tamil teenager, as she struggles to deal with trauma from her father’s unexpected death (on top of the other typical trials of being a high schooler). After a less-than-ideal freshman year of high school, Devi seeks to reinvent herself and climb the social ladder. Devi exudes confidence in the best ways – she’s unfiltered and unapologetic while still clearly making up the plan as she goes along. But she is also vulnerable in the most relatable ways, routinely messing up and accidentally hurting people that she cares about. Never Have I Ever can help teach young folks about accountability, priorities, and honoring your true feelings. Thankfully, it was renewed for a third season, and the first two are available to stream on Netflix!

In just two seasons, Maya Erskine and Anna Konkle’s PEN15 was able to capture the middle school experience for folks growing up in the early 2000s. On the surface, PEN15 showcases the most cringe-worthy and awkward parts of puberty, with episodes about periods, school dances, first kisses, and sleepovers. But as the deeper the plot digs into Maya and Anna’s lives, we remember that experiencing death for the first time, being in the middle of a parents’ messy divorce, or a traumatic sexual experience can also define a person’s adolescence. The best part of this show is that Maya and Anna (now in their 30s) play their 13-year-old selves alongside current tweens. Both currently young people AND their champions will feel the impact of PEN15’s story. Stream the entire series now on Hulu!

We love that the reboot of the CW’s Gossip Girl on HBO Max is already way more inclusive and diverse than its predecessor. And even though the characters’ outrageously expensive lifestyles aren't the most relatable aspect of the show, their drama is rooted in the typical highs and lows of teenage love and friendships. As always, the plot of Gossip Girl moves fast, with a handful of new scandals dropping each episode. The story follows teenage New Yorkers as they navigate friendships, explore polyamory, and learn how to do the right thing – with their every move immortalized on social media. This time around, however, both the characters themselves and the Instagram account that chronicles their mistakes seem to have a conscience that was absent the first time around. The first season, split into two six-episode parts, is available to stream on HBO Max.