Talking About Abortion is Power(ful)

Talking About Abortion is Power(ful) 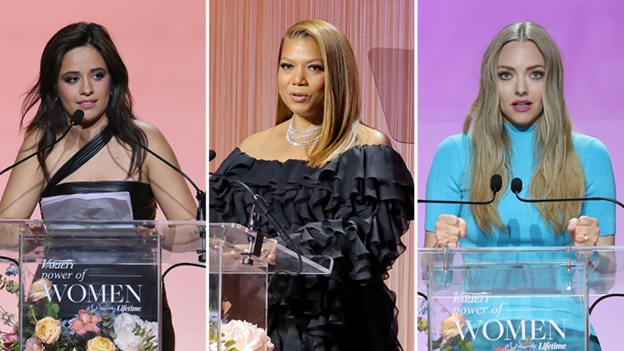 During #TalkingIsPower month—when we encourage everyone to open up inclusive, judgment-free conversations about sex, love, relationships, birth control, pregnancy and sex education—we are even more aware of that it’s not just what you say, it’s how you say it, and who’s saying it.

When the leaked draft of the Supreme Court’s opinion on Roe v. Wade was published in Politico a loud chorus of voices shouted out in support of abortion access. There’s been an avalanche of news coverage pointing to resources like Abortion Finder and explainers to help people cut through the disinformation and figure out what this means on a personal level. Vice President Harris met with abortion providers, and rallies continue across the country.

The disturbing news has driven leading culture voices to speak up on a topic that was once concerned too hot to handle in Hollywood. Not now. Which is powerful progress in its own right. We are hearing more abortion stories and more support from more voices: those whose abortions saved their lives, those whose abortions were a calm and supportive experience, and those who have not had abortions themselves but who believe in access for all.

Celebrities are using their sizeable megaphones to promote abortion access and support abortion providers. While it’s important to sound the alarm, it is equally important—and powerful—to debunk myths and normalize abortion for the common, safe procedure that it is. It’s basic health care that the majority of Americans—across party lines—believe should remain legal.

We are also hearing more about how tough access is. Abortion is legal in all 50 states, but it has not been readily accessible to many, particularly people of low-income and people of color, for a very long time. If Roe v. Wade is overturned, “The burden will fall disproportionately on women of color, Black women, people without documentation, people living in rural areas, people in the South...and in the Midwest, ” our CEO, Dr. Raegan McDonald-Mosley, told the Associated Press.

As abortion bans continue, and many fear that birth control could be next, media personalities are turning up the volume to inform and mobilize their fans. Here’s a snapshot, plus some ideas for how to raise your voice. 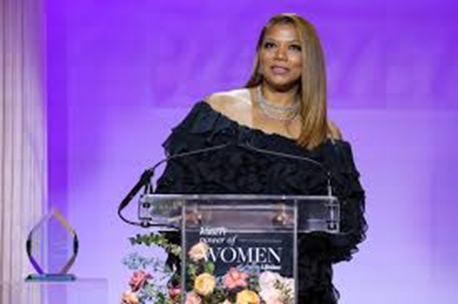 Just days after the leaked SCOTUS opinion, Variety’s Power of Women ceremony, presented by Lifetime, set out to “celebrate the accomplishments and philanthropy of women across the entertainment industry.” Honorees and attendees focused on fighting for reproductive rights and expressed a mix of anger and determination. It’s refreshing and inspiring to hear impassioned red carpet conversations about supporting abortion rights from such a wide range of voices, with no hesitation. Variety Editor-in-Chief Claudia Eller put it clearly: “I implore all of us to join the fight for women and for choosing what we do with our own bodies. It’s imperative.”

Honoree Queen Latifah said: “It is a very strange time for us…There are a group of people who are trying to steal our power. Our power to decide what we want, for our bodies, for our families, for our future.” Actor Billy Porter asked “Why are we surprised? They’ve been going for that for forty years. I’m not surprised. Nor should anyone else be.” Recording artist Camilla Cabello called the expected overturning of Roe v. Wade “atrocious,” and expressed fear for women in poverty who would suffer the most, urging fans to get “loud and angry about it.” Honoree Amanda Seyfried noted: “Women’s safety and security…is far too often negotiable. And it’s not negotiable to me. There’s no better moment, not just to celebrate the power of us women, but to use it.” 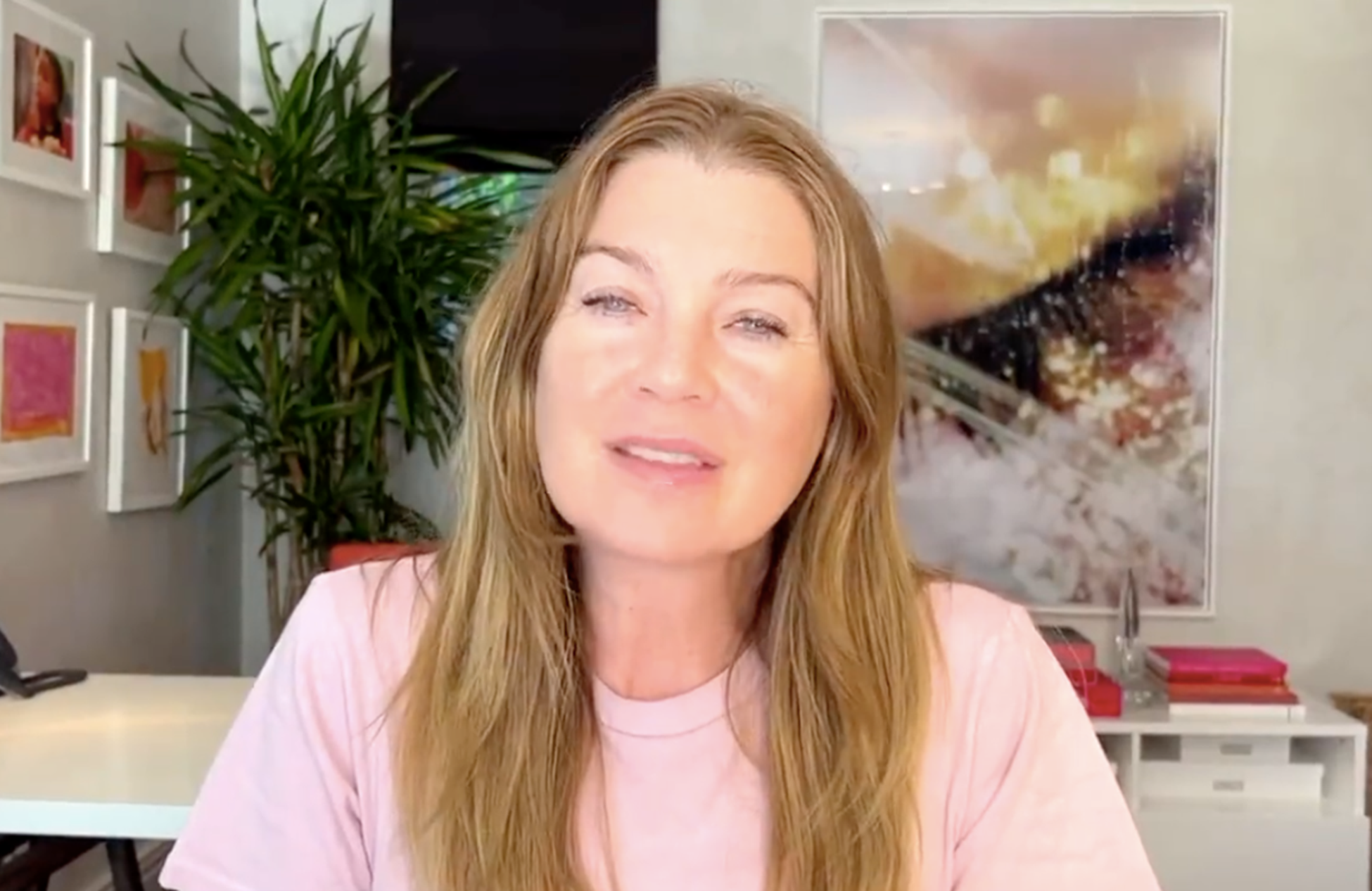 Ellen Pompeo, Kevin McKidd, Chandra Wilson, Kim Raver, Kelly McCreary, Caterina Scorsone, Kate Burton, and other cast members of the hit ABC drama Grey’s Anatomy filmed an original PSA to inform viewers about reproductive health, know their options and urge them to take action. “Knowledge is power. It's time for you to be in the know,” Pompeo says in the clip. “Share this information with your friends. Keep a woman powerful. You are powerful.”

Producer Shonda Rhimes, Shondaland, and others are sharing the spot in social media—reaching millions in the first 24 hours—in the hopes that the information and resources will be easily shareable and reach people where they are. The video and social media posts encourage viewers to visit Bedsider.org, AbortionFinder.org, AbortionFunds.org, CrisisTextLine.org, and other resources. Follow @ByShondaland for updates and shareable content. 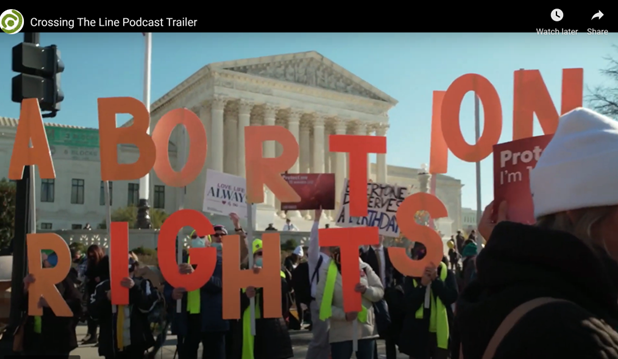 Crossing the Line, a 10-episode docu-style podcast coming soon from global NGO Population Media Center, will follow the journeys of individuals seeking abortion care despite legislative, geographic, socio-economic, or other barriers. “With first-person narratives, our listeners will take the journey with individuals and those helping them navigate the path across family lines, emotional lines, and state lines. Crossing the Line will reveal the human side to each of these stories, as told from the frontline in the fight for reproductive rights,” said Lisa Caruso, Population Media Center’s Head of U.S. Content and creator of Crossing the Line.

As a partner and advisor to Crossing the Line, Power to Decide is providing expertise and helping listeners connect with resources like AbortionFinder.org, and with abortion storytellers in communities nationwide. Follow @PopulationMedia for podcast launch updates and information on how to subscribe. 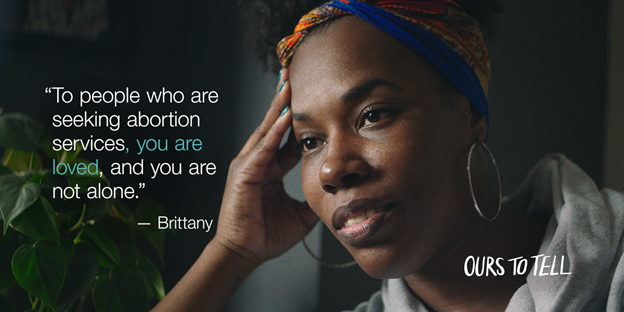 Ours to Tell, a Short Film

Ours to Tell, a film from We Testify and Planned Parenthood that tells the story of four people who live full and empowered lives because they had the freedom to access abortion. We Testify is a nonprofit dedicated to the leadership and representation of people who have abortions, increasing the spectrum of abortion storytellers in the public sphere, and shifting the way the media understands the context and complexity of accessing abortion care. Share the film and check out tips for sharing your own abortion story. Says We Testify Founder and Executive Director Renee Bracey Sherman: “Sharing your abortion story will help remind people in your family, circle of friends, and community that they love someone who had an abortion.”