What is Reproductive Well-Being

Reproductive well-being means that all people have equitable access to the information, services, and support they need to have control over their bodies, and to make their own decisions related to sexuality and reproduction throughout their lives.

This powerful idea, if shared by everyone, would dramatically change the care people receive, the opportunities available to them, and the systems of support that surround them. But it is not reality—or even a shared idea or priority—today. Too many people—especially those who are young, economically disadvantaged, facing racism and discrimination, or otherwise marginalized— lack the power to decide if, when, and under what circumstances to have or raise a child. We have an urgent imperative to build, align, and enhance the systems that support people, and to create a culture of equity, empowerment, and autonomy.

The History Behind the Reproductive Well-Being Movement

In 2017, Power to Decide convened leaders and practitioners from more than 50 national, state, and local organizations including March of Dimes, American College of Obstetricians and Gynecologists (ACOG), Association of Maternal and Child Health Programs (AMCHP), National Birth Equity Collaborative (NBEC), Nurse Family Partnership, and UCSF, among others. The purpose of this collective was to address the gap between people’s stated intentions to prevent pregnancy and their actions to do so otherwise known as “intentionality.”

In addition to convening these stakeholders, focus groups were conducted across a range of sectors, geographies, and backgrounds including in-depth interviews with experts in reproductive justice, reproductive health, and men’s health; a tribal community leader; a faith leader; and an advocate for LGBTQI+ issues. We also engaged an online focus group with 115 people representing those with lived experience. In addition, we held three online focus groups with doulas, health care providers, nurses, and nurse practitioners as well as four in-person focus groups with parenting and expecting teens, social service and health care providers, and the general public. In total, more than 300 people were a part of supplemental research to frame the reproductive well-being work. With this full body of data, it became clear that “intentionality” was not the right focus or framing for what we were trying to accomplish. Our focus group and in-depth interview work highlighted the fact that intentionality did not resonate with our target audience. In fact, these young people often reported feeling like they did not have the power, agency, or self-efficacy to set their intentions related to pregnancy and reproduction. The stakeholder group took this feedback back to the drawing board and created the reproductive well-being framework, which shifts the focus from personal intentions and responsibility to the systems of support around that individual, which should be designed to help them align their desires with their actions.

The reproductive well-being collective divided the work into groups. At the national level, the work focused primarily on establishing the values, narrative, policies, and practices necessary to enculturate reproductive well-being as the new norm. This work resulted in a Reproductive Well-Being National Blueprint for Action. This document was seen by the group as an agenda for change, outlining macro level actions that could result in establishing reproductive well-being as a national priority. In addition to the National Blueprint for Action, the collaborative has also developed a shared narrative and message framework. The hope is that, once fully disseminated, there will be measurable change in sectoral policies, positions, and practice, as well as public attitudes, beliefs, and sentiment about sexual and reproductive health.

Narratives guide what people think, believe, and do. They influence mindsets and shape cultural norms and expectations and can be created through collection of stories and lived experiences. Using interviews and focus group data to develop a reproductive well-being narrative, four core pillars emerged specifically centered on autonomy, agency, and empowerment.

Overall, narratives can be a powerful tool of social change, shifting assumptions and mindsets to create demand for new actions. The Reproductive Well-Being narrative is no exception. 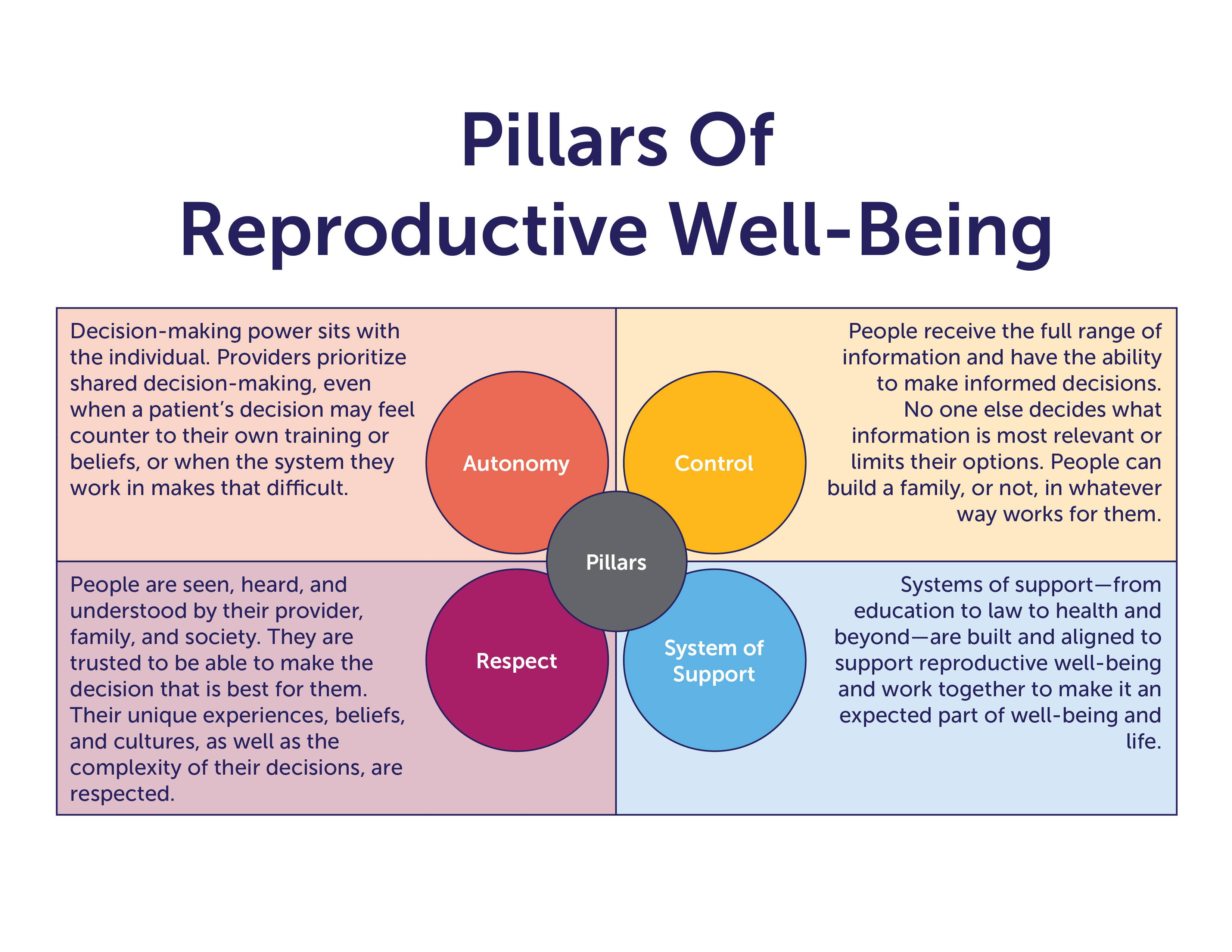 In addition to a National Blueprint for Action and a shared narrative framework, a place-based implementation toolkit was developed. The aim of the toolkit is to transform the way in which health care is delivered and conceptualized by incorporating best practices in sexual and reproductive health, preconception health, and contraceptive care and access, as well as broader systems and coordination support.

Improving RWB from Within the Community

Read how three of our eight teams are working to improve the reproductive well-being of their communities and the challenges they’re overcoming to do so.
January 1, 2020

Join Us in Building a Nationwide RWBM

Are you interested in joining more than 40 national, state, and local organizations to build a nationwide Reproductive Well-Being Movement?

We’d love to hear how you are championing reproductive well-being in your community. Email us.