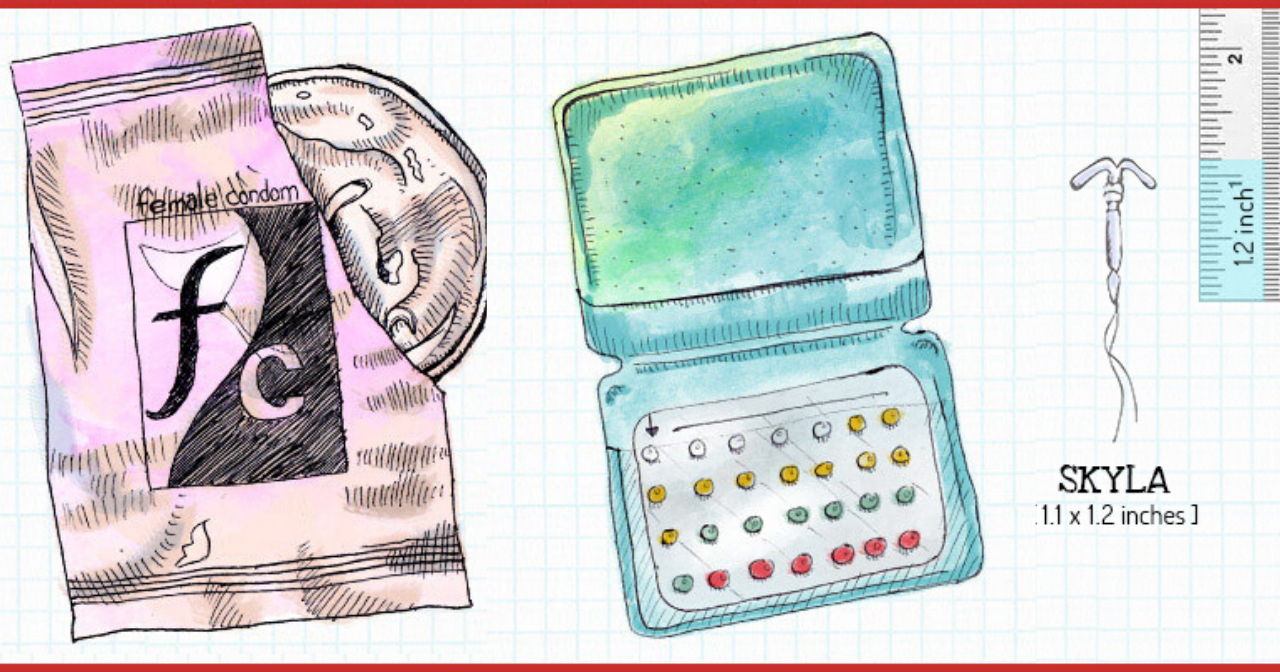 Choosing the birth control method that’s right for you can oftentimes be a bit confusing. There are many different factors to consider, such as what methods will cause irregular bleeding patterns, which will protect against STIs, and how accessible they are to you. According to a study by the Centers for Disease Control and Prevention, the average number of methods a person uses over their lifetime is three. But fear not, for choosing your method does not have to be as complicated as it seems. It is important to note that while this guide will give you a better idea of your options, there are tons of different types of birth control that exist: if you're interested in exploring some more, click here.

Before we dive in, it’s important to remember why birth control is so useful. Obviously, it protects against unwanted pregnancies and some methods can prevent sexually transmitted infections (STIs), but birth control has other less talked about advantages. For starters, some methods of birth control can reduce cramping during periods and improve acne. So, even if you aren’t at risk for pregnancy right now, birth control is worth investing your time and consideration.

The Implant and IUDs

The implant, brand name Nexplanon, is popular among young people as it doesn’t require much thought once placed. It’s placed by a health care provider, like a doctor or a nurse practitioner, and stays in your upper arm preventing pregnancy for up to five years. The biggest downside to using the implant is that it can cause irregular bleeding. That means that some people might have no bleeding while others have bleeding that comes and goes or even happens every day. So, if someone like a parent is tracking your periods, this method might not be super private. The implant additionally does not protect against STIs.

The IUD is another method to consider if you’re looking for something easy to use. An IUD is placed inside the uterus by a health care provider and changes with the way sperm move so they don’t fertilize the egg. IUDs can last from three to twelve years depending on the type you get and come in both hormonal and non-hormonal options. The hormonal IUD can cause some irregular bleeding, but overall people with this type of IUD have less bleeding and cramping with their periods. The non-hormonal IUD doesn’t change when you get your period, but it might cause you to have more cramps and a heavier period. IUDs do not protect against STIs.

The pricing for both the implant and IUD may be too much for anyone who does not have insurance or wishes to not use a close family member's insurance for privacy reasons. On the other hand, once placed, no one has to know that you are using the implant or an IUD, but someone could feel the implant in your arm and a partner could feel the IUD strings in your vagina.

The pill is one of the most popular methods of birth control out there and is a solid option for anyone that prefers a shorter-term method. It’s not the most private method, as regular visits to the pharmacy and taking pills every day are required for it to successfully prevent pregnancy. The pill prevents pregnancy by affecting the hormones in your body to prevent you from releasing an egg. It requires responsibility, with the taker having to take it every single day no matter what. So, think about your schedule and if you can truly commit to a new habit. If you don’t think you can, it’s perfectly okay, people of all ages have trouble taking the pill consistently.

The pill does not protect against STIs and causes some bleeding between periods, but is free for almost everyone with insurance, and low cost without.

The patch is a small sticker, like a Band-aid, that you change once a week, making it more low maintenance than the pill. It’s less private as it is in public eyesight, but similar to the pill, it doesn’t require you to insert anything into your body and works by preventing your ovaries from releasing an egg.

Another thing to consider is that the patch was only tested in people weighing less than 198 pounds. So, it may not be the best method for preventing pregnancy if you weigh more than that. The patch also does not protect against STIs and you may experience bleeding in between periods. However, it is low cost or free for anyone with insurance, and about $55 a month without.

The condom is cheap and accessible. You can buy them almost anywhere and do not need to see a provider for a prescription. They have the added benefit of protecting you from both pregnancy and STIs, making them a good choice for many teens when they become sexually active. What you may not know is that condoms can vary in sizes and colors, some have lube while others don’t, and some even come with another method of birth control—spermicide.

Internal condoms (which are placed inside the vagina like a tampon and can be put in up to eight hours before sex) are additionally another option you have at your disposal. Internal condoms also protect against both unplanned pregnancy and STIs. Internal condoms cost around $2 each if your insurance doesn't cover the cost. Some health centers may provide internal condoms for free.

Condoms are cheap and you can get them in most pharmacies, gas stations, and for free in most clinics without talking to a health care provider. No one other than your partner has to know that you are using them for birth control making them a fairly private method to use. You can use condoms with other forms of birth control at the same time (just not the internal condom) to be protected from STIs (like chlamydia or gonorrhea) and pregnancy. Condoms cause no physical side effects.

If you ever need birth control after you’ve had sex, emergency contraception (EC) can seriously save you.

There are several types of EC. Let’s start with the non-hormonal copper IUD. It is the most effective method of emergency birth control there is, and if inserted within 5 days of unprotected sex, your chances of pregnancy will lower by 99.9%.

Another form of contraception after sex is a one-pill formula available by prescription, which blocks the hormones your body needs to conceive. Like the copper IUD, it works up to 5 days afterwards and unlike other EC pills, doesn’t decrease in effectiveness during that time.

Plan B One-Step and similar variations are a third type of EC and are available over the counter or online without a prescription. Plan B is comparable to normal birth control pills, except it contains a much higher dose of hormones. Plan B, like the other emergency contraception methods, can work up to five days after unprotected sex, but its effectiveness will decrease each day.

In the end, you have options. Use this locator to find where you can access emergency contraception near you.

No matter which method you ultimately decide on, it is always best to find what works for you. Talk to your provider and remain open to trying something new. The more you learn, the better. Keep exploring your options, do research of your own, and ask questions so you can find a method of birth control that works for you and your life. We want everyone to love their birth control so much they shout, “Thanks, birth control!”

Anna Labarca is a senior at Walt Whitman High School in Maryland. She writes for the student newspaper, The Black and White. She plans to study journalism in college and is interning at Power to Decide to learn more about the role communications has in campaigns.