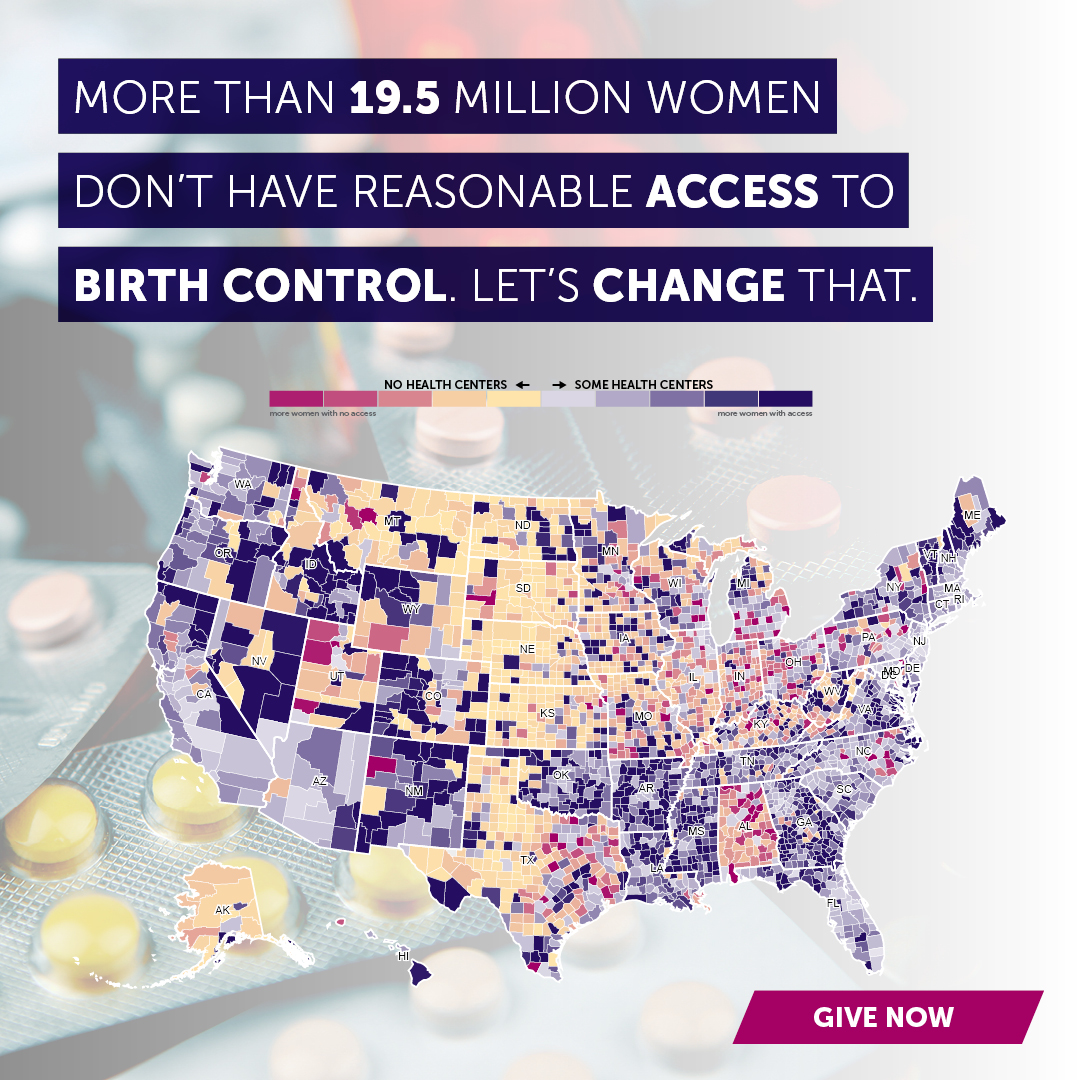 Mary is 29 and lives in Georgia. When she wanted to find a birth control that reduced her near-debilitating cramps and extreme bleeding she had to wait more than three months for an appointment at her nearest health center.

Emily, age 34, from Missouri, doesn’t have a clinic that prescribes birth control in her county. She travels more than 50 miles whenever she needs a new prescription or wants to see a provider.

If you’ve ever felt frustrated or angered by the distance, the time, and the choices that people are forced to make when accessing birth control – you’re not alone. We believe no one should have to choose between a stable income and creating a family on their own terms. We believe that if you choose to take birth control – for whatever reason – you should have access to it within 60 minutes of wherever you live, regardless of your income.

Seeing a provider, accessing trusted information, and finding the right birth control becomes nearly impossible without access. To gain it those living in contraceptive deserts often face decisions such as,

“Do I take an unpaid day off work or do I skip the doctor?”

“Can I afford to pay a babysitter during my appointment?”

“Is getting birth control worth taking 4 buses and walking a mile?”

And the situation is getting worse.

In 2018 alone, the Title X family planning program served roughly four million people. But recent attacks on the program have undermined the ability of Title X family planning providers to offer the full range of contraceptive care. They are hampered by the “domestic gag rule,” a rule which requires health providers at sites that receive Title X funds to withhold information about abortion and bans them from referring for abortion. In response to the gag rule many Title X providers have been forced out of the program. To date, 30 states have lost all or some Title X resources.

Eliminating Title X health centers entirely would impact women across the country. The number of women living in counties with no clinic offering the full range of methods would nearly triple.

To bring contraceptive deserts back to life and to help address the damage the gag rule is doing to birth control access, BCBenefits, our contraceptive access fund, supports women’s power to decide if, when, and under what circumstances to get pregnant and have a child. Administered via Bedsider, our digital, evidence-based birth control information and resource network, BCBenefits helps low income women overcome some of the most commonly-faced barriers when trying to access birth control, such as  transportation.

Since launching nationally in April 2018, BCBenefits has helped more than 2,000 people receive a year’s worth of birth control for free. Nearly all (98%) who have used BCBenefits say they would recommend it to a friend. Other users have told us, "It was a life saver when I needed it the most,” and “The process was a great experience."

We invite you to help reduce the barriers women face accessing the birth control method right for them by donating today. And spread the word: the more people who know about BCBenefits–both women in need of assistance and people like you interested in helping them–the more we can create change.